The commanding officer of the Nigerian army was killed while returning home to his family. 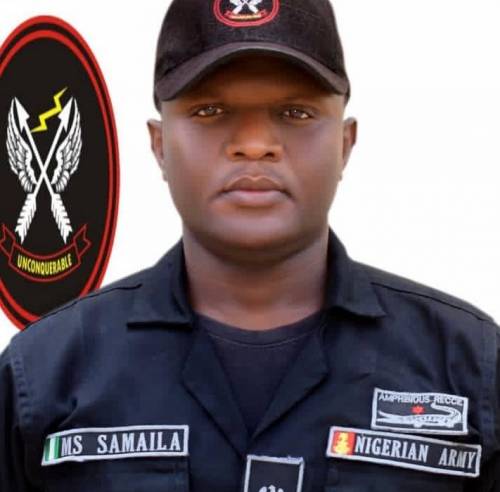 Samaila
A commanding officer of the Nigerian army has been killed by bandits.
According to Sahara Reporters, Major MS Samaila was travelling on the Kano - Maiduguri Road on Saturday when he was attacked and killed by bandits.
Samaila, before his death, was the AG Commanding Officer of the 196 Amphibious battalion in the Isiala Ngwa area of Abia State.
A military source told SaharaReporters that the deceased was returning from his station in Abia state to his family when the unfortunate incident occurred.
He said, “This is Major Samaila of 145bn OC in Isialagwa Abia state. He was attacked by armed bandits on the Kano-Maiduguri Road while going home to see his family. Abia State was his unit before he died. This is saddening, and the country is annoying. Both his wife and children now are on their own.”
The development comes amid rising insecurity in the country with soldiers becoming one of those worst hit in the fight against the situation.
SaharaReporters had chronicled the plights of different soldiers leading the war against Boko Haram in the Northeast region of the country.
A soldier had told SaharaReporters that many of his sick colleagues were still in the bush fighting Boko Haram to the detriment of their health following the death of one of them.
"He was sick here in the bush, but he went home and died. The man had been dying slowly. I am tired of the country. I don't feel happy when the wrong things are happening. I will soon quit the army to work in a place where I will have freedom of speech," he had said.
"We still have some people that are medically unfit but are still here which isn't supposed to be so. It's sad because if this were to be a United Nations operation or that of the Economic Community of West African States (ECOWAS), they'll drop you even if it's only high blood pressure that you have.
"But now those that have health issues are here in the bush fighting. Were it to be an operation that they feel they'll make more and get other benefits, they'll deny them. This should not be the case but what are we going to do? That's the situation we find ourselves in at the moment."
Top Stories