Politician and human rights activist, Omoyele Sowore, disclosed this in a post via his Twitter handle on Thursday. 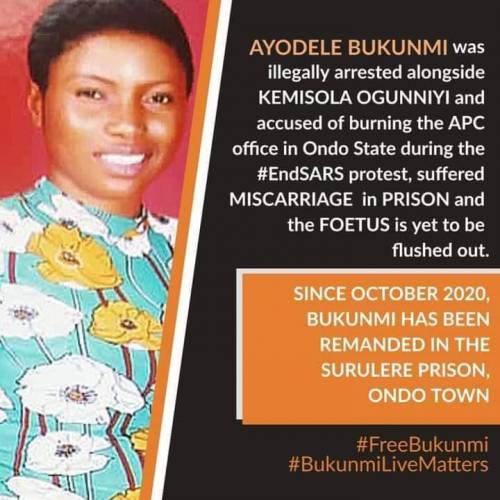 A young woman, identified as Ayodele Bukunmi, who was arrested during the #EndSARS protest in Ondo State, has been granted bail.

She, however, lost her three-month-old pregnancy as a result of the torture she was subjected to by a combined team of operatives of the Nigeria Police Force and the Nigerian Army.

Sowore tweeted, “Bail granted to Ayodele Bukunmi, the young female arrested in Akure last October during #EndSARS, unfortunately, she lost a 3-month pregnancy due to torture by a combined team of Nigeria Police Force and the Nigerian Army, she was cellmate with Kemisola Ogunniyi, the young female who delivered a baby while in prison some two weeks ago.

“Great thanks to Tope Temokun, the attorney who took up this case & great citizens of conscience who stood up (and continue to stand up) against @mBuhari’s tyrannical regime! #RevolutionNow #BuhariMustGo.” Bukunmi was arrested alongside Ojo Samuel, Ani Obinna and Kemisola Ogunniyi on October 22, 2020.

They were all charged with conspiracy to commit arson, riotous assembly, stealing and malicious damage, and later remanded in Surulere Prison in Ondo West local government area of the state.

In June, with the help of human rights activists, the Ondo State High Court sitting at the Olokuta Medium Prison in Akure granted bail to Ogunniyi after she birthed a baby at the Surulere Prison in Ondo town.

Ogunniyi, who was on her way to a pharmacy to buy drugs for her mother, was detained by police operatives in October 2020, on claims that she was part of the protesters that burnt a police station and the office of the All Progressives Congress.

Kemisola was said to have gone into labour on June 15 and given birth to a baby boy the following day.

Sowore had in a Facebook post called on Governor Rotimi Akeredolu of the state to look into the issue, adding that the mother of the newborn was innocent and never committed any offence.

The post by Sowore triggered public outrage, which aided her release.