The 90-year-old man apprehended by the National Drug Law Enforcement Agency has been identified as Yusuf Yarkadir. 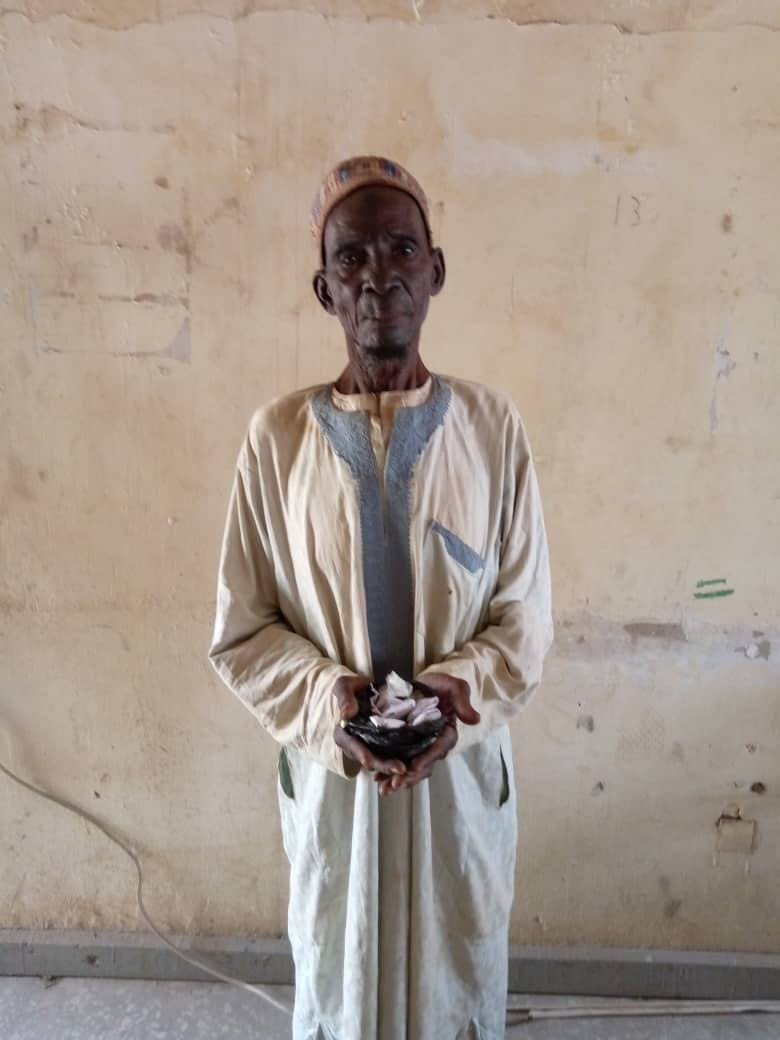 Yarkadir
A Nigerian man who makes a living by selling illicit drugs to youths has been arrested.
The 90-year-old man has been identified as Yusuf Yarkadir.
He was arrested by operatives of the National Drug Law Enforcement Agency, NDLEA, for selling drugs to the youths in Yarkadir village in Rimi Local Government Area of Katsina state.
Director, Media & Advocacy of the agency, Femi Babafemi, who disclosed this in a statement on Friday, said the nonagenarian was arrested on Wednesday, July 7.
Full of regrets under interrogation, Yarkadir confessed he has been selling cannabis sativa to the youths in his community for eight years due to their demand for the illegal substance.
Though he failed to disclose his source of supply, he however vowed his arrest would now make him to back out of the business having tried in the past to stop the illicit trade without success.
In the same vein, narcotic officers in the Ondo state command of the Agency have arrested two teenage siblings along with other suspects for dealing in assorted illicit drugs in the state capital.
The teenagers; Onyema Sunday, 16, and his sister, Onyema Amaka, 15, were arrested in Car street area of Akure with 1.894kilograms of Tramadol on Monday 5th July while 23-year-old Kazeem Oluyede was nabbed in Eru Oba area of the capital city with 300grams of cannabis and 3grams of methamphetamine, just as a lady Maryam Musa, 35, was arrested in Igbara-Oke, Ifedore local council area of the state with 5.5kilograms of cannabis, all same day.
Also in Ondo state, following credible intelligence and surveillance, NDLEA operatives on Wednesday 7th July stormed the Ogbese market, in Akure North LGA, where Messrs Jalamia Ochonogor and Austin Uzoka were arrested with 63kilograms of cannabis.
Elsewhere in Bauchi state, at least seven persons have been arrested and 28.091kilograms of assorted drugs such as Diazepam, Exol-5, Rophynol, Tramadol, Codeine, and cannabis recovered from them. Those arrested in two separate raids by operatives of the Bauchi state command of the Agency Include: Sunday Obi, Abba Abdullahi, Samuel John, Chijioke Agu, Sani Musa, Alhaji Alhaji Baffa, and Abubakar Saidu.
Meanwhile, different quantities of illicit drugs going to the United States, the United Kingdom and New Zealand have been intercepted and seized by narcotic officers of the Directorate of Operations and General Investigations, DOGI, attached to some courier companies in Lagos.
In one of the courier firms, 400 grams of Ketamine hidden in walls of hair attachments carton coming from Cameroon and heading to the US was seized. Others include: 30grams of Tramadol concealed in female headgear coming from Onitsha, Anambra state and going to the UK; 200grams of Ketamine from Cameroon going to USA; and 400grams of Methamphetamine from Asaba, Delta state heading to New Zealand
While commending the officers and men of Katsina, Ondo and Bauchi Commands as well as DOGI for their vigilance and commitment to the goal of ridding every community in Nigeria of the menace of drug abuse and trafficking, Chairman of NDLEA, Brig. Gen. Mohamed Buba Marwa charged them not to relent, but should continue to raise the bar in the ongoing offensive action against the scourge and the cartels behind them.
Top Stories