The #BuhariMustGo protesters had dragged the church and the DSS to court over their illegal, arrest, detention and violation of their human rights. 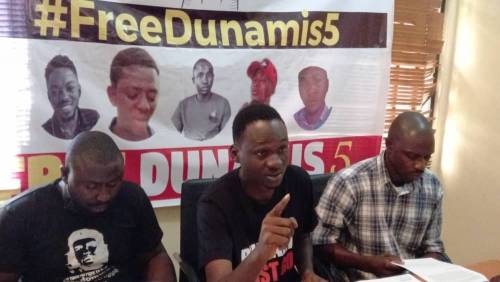 According to a report by SaharaReporters, human rights groups, Social Action and Take It Back Nigeria have warned that it will mobilise its members on Sunday to protest during services at the Dunamis International Gospel Centre (Glory Dome), Abuja, over the illegal arrest and detention of five #BuhariMustGo protesters by the Department of State Services (DSS) officials.

The groups at a press conference in Abuja stated that "the arrest and continued detention of these courageous young people have no basis in law and are a contravention of their fundamental human rights to freedom of expression, assembly and freedom of movement as guaranteed under Sections 39, 40, and 41 respectively."

"We call on the lawless entity called the DSS to immediately and permanently unconditionally release Emmanuel Larry, Henry Nwodo, Samuel Gabriel, Ben Manasseh and Anene Udoka, as protest remains lawful and democratically permitted in Nigeria," one of the conveners, Dare Ademola, said.

"We are going to mobilise to storm the church in large numbers to demand the freedom of these activists."

SaharaReporters earlier today reported that the #BuhariMustGo protesters had dragged the church and the DSS to court over their illegal, arrest, detention and violation of their human rights.

The respondents are; the State Security Service, the Director-General of the SSS, the Attorney General of the Federation, Abubakar Malami, and the Pastor-in-charge of the Dunamis International Gospel Centre, Pastor Paul Enenche.

The suit is being heard at the Federal High Court of Nigeria; Abuja judicial division. 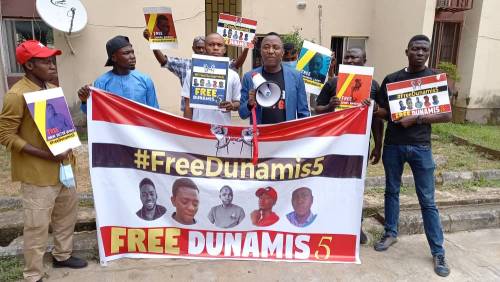 Human rights activist, Omoyele Sowore, who had recently gone to the church in company with fellow activist, Deji Adeyanju, shared the court papers, noting that the five detained activists had sued the DSS and the church authorities over the violations of their human rights.

“#FreeDunamis5 Five activists wearing #BuhariMustGo Tshirts illegally detained by lawless DSS after they were tortured and handed over by @DrPaulEnenche’s @DunamisGospel security have sued the DSS and @DrPaulEnenche over violation of their rights,” he stated.

SaharaReporters had on Tuesday reported that the DSS admitted that it was the Dunamis church which called for the arrest of five human rights activists who wore the #BuhariMustGo T-Shirts to its church service last Sunday.

SaharaReporters earlier reported that the DSS and the church had first both denied arresting and detaining the human rights activists.

But it was learnt on Tuesday that the DSS admitted that the Dunamis church called them to take away the "suspects."

“About 48 hours after illegal arrest and detention by Dunamis church, we don’t know the whereabouts of these #BuhariMustGo activists,” one of the sources had said.

“The DSS has admitted that it was Pastor Enenche who called them. Earlier, the FCT command of the DSS as well as the Headquarters had both denied having in custody the five activists arrested by Dunamis church security (guards).

“Meanwhile no one has heard from the activists since Sunday when church security attacked them and detained them in the church premises. Their phones have since been switched off,” a source had revealed.

“Two of them are said to be detained at the defunct Special Anti-Robbery Squad section of the state police command,” another source had stated.

SaharaReporters had on Sunday reported that about ten activists went to the church on Sunday morning to worship at the church but some of them were surprisingly rounded up and arrested by the church security guards who later handed them over to the DSS operatives.

The activists were arrested for wearing #BuhariMustGo T-shirts to the church.