Iwatonaiye, a blind Saxophonist, one of the detained activists, was said to have fallen ill in custody and had not been given medical attention. 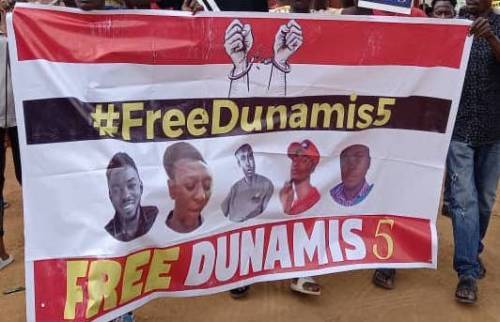 In spite of a release order from the Federal High Court, the Department of State Services has filed charges at a Magistrate Court in Abuja against the five activists arrested at the Dunamis International Gospel Centre for wearing #BuhariMustGo T-shirts, according to SaharaReporters.

SaharaReporters had on Monday reported that Justice Anwuli Chikere of Federal High Court while ruling on the ex parte motion filed ordered the DSS to immediately release the activists from detention.

The DSS were thereafter served the court order by the court bailiff same day.

But the DSS claimed ignorance of the court order and hurriedly filed charges bordering on public disturbance against the young Nigerians before a Magistrate Court, Mpape according to a court document sighted by SaharaReporters on Wednesday.

The activists will be arraigned before the court today.

It was gathered that the activists were on Monday secretly taken to the same Magistrate Court to secure a remand order to further detain them without the knowledge of their lawyer.

Iwatonaiye, a blind Saxophonist, one of the detained activists, was said to have fallen ill in custody and had not been given medical attention.

The situation is giving their families and relatives a serious concern.

The activists through their lawyer had sued the Director-General of the DSS, Yusuf Magaji Bichi, the Attorney General of the Federation, Abubakar Malami, and the Senior Pastor of the church, Paul Enenche, over their illegal arrest, detention and violation of their rights.

Two days after the arrest of the worshippers, human rights’ activists, Omoyele Sowore and Deji Adeyanju accompanied by their lawyer, Abubakar Marshal, had met with the Senior Pastor of the church to demand for their release.

The pastor was said to have confirmed that the arrest was made by DSS and absolved the church from the entire scenario. He also said he had been in touch with the DSS officials to get the young Nigerians released.

But unfolding events had showed that the church security and Enenche masterminded the arrest and torture before handing them over to DSS.

SaharaReporters had reported how some members of the civil society group who went to the church to protest and demand for the release of the activists were harassed by overzealous policemen and church security leading to the arrest of two journalists from Punch Newspaper and Roots TV.