Umezuruike before his tragic death was the leader of a vigilante group, the Omudioga Security Planning and Advisory Committee.

The graphic photo of Mr Alex Umezuruike has surfaced after he was beheaded by suspected cultists and his body cut into pieces.
Umezuruike before his tragic death was the leader of a vigilante group, the Omudioga Security Planning and Advisory Committee (OSPAC), in Emohua Local Government Area of Rivers State.
The killing, The Guardian gathered, has caused panic in the area as residents were said to be fleeing the communities over fear of further attacks.
It was learnt that the cultists invaded Umezurike’s home and shot him severally before chasing him into a nearby bush after bullets could not penetrate his body.
The Guardian learnt that the killers later captured and killed the local vigilante leader with knife before decapitating his head from the body.
A source who craved anonymity said that after killing and beheading the OSPAC commander, the killers brought back his body to the compound where it was cut in parts and his head paraded round the community.
The source said, “Some cult boys came into our community last night. They killed the commander of OSPAC in the community.
“They came to his house shot him severally but it did not enter. He later ran into the bush. They went after him. They caught and killed him. The killing was horrible.
“The returned his body to their compound and cut it pieces. They cut his head and carried it round the community be before living.”
The killing comes barely three weeks after the Chairman of Emohua Local Government Council, Dr Chidi Lylod pronounced the proscription of all vigilante groups in the council and asked communities that make up the Council area to submit five names of natives who will be screened and recruit into a new security outfit to be established and funded by the council in no distant time.
The spokesman of the Rivers State police command, Nnamdi Omoni, said the dismembered body of the victim has been recovered and deposited in the mortuary.
Omoni said the Police have also restored normalcy in the community while the Commissioner of Police, CP Eboka Friday has ordered full-scale investigation into the incident. 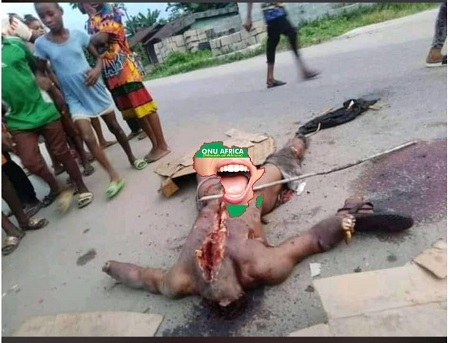