One of the suspects identified as Ikechukwu Nweke, who initially fled to Anambra as soon he regained his freedom, was rearrested in Ojo Alaba area in possession of a gun. 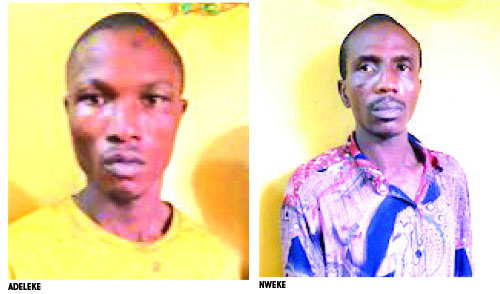 According to a report by Sun News, the Lagos State Police Command has re-arrested two of the fleeing inmates that escaped from its cell during the ENDSARS protest in 2020.

Several inmates, especially notorious armed robbers, were said to have overpowered policemen on guard and escaped from the defunct Special Anti-Robbery Squad (SARS) cell with several arms and ammunitions.

One of the suspects identified as Ikechukwu Nweke, who initially fled to Anambra as soon he regained his freedom, was rearrested in Ojo Alaba area in possession of a gun.

The second inmate, Remi Adeleke, who was alleged to have formed another gang was re-arrested few days after he led a three-man gang to raid about eight houses in Ikorodu.

He was picked in Mushin by policemen who were on his trail after the incident. According to the state police spokesman, Muyiwa Adejobi, a Chief Superintendent of Police, operatives attached to the Strike Force Team of the command trailed and arrested Adeleke after the Ikorodu robbery incident while Nweke was picked up by policemen on patrol who randomly stopped him for a search and discovered the gun. On how he managed to escape, Nweke said that he got news that people were escaping and that SARS boys were no longer in charge.

“In the cell, there are trusted inmates who are in-charge of the gate. They do not sleep inside the cell but by the passage. They are trusted by the police. When we got information that a new set of policemen were the ones in charge of the cell, we decided to act quickly. No one will try such if it were SARS boys, because that is automatic death sentence.

“We grabbed the cell boys and forced them to open the cell. We took over the whole place and everyone started running.  We broke down the fence and ran away from there. I don’t know how many persons that ran because we were busy trying to save our lives. I did not take any gun but some of us did.” According to Nweke, he was able to get a free ride to Berger where he spent the night.

“I waited till night before I got a truck that gave me free ride to Anambra. I am from Awka in Anambra and that was the only place I could run to. My people were not aware that I was arrested so they welcomed me when I told them that I ran away from Lagos because of the ENDSARS crisis.”

Back home, Nweke told Saturday Sun that he joined other cult boys to steal to survive.  “Cultism is high in Awka, Anambra and if you do not have a good job, this was the only way out. Most of us were pretending to be Biafra agitators and I do not want to join them because I am not ready to sleep in the bush for days. We would just go and harass people and when they ask us, we will claim IPOB (indigenous People of Biafra). Ever since they arrested Nnamdi Kanu, everyone is scared. I swear I am not a member, just a hungry man that is trying to survive in this country.

“When he was arrested, I knew that it was time to go. I decided to move back to Lagos when I learnt that the police were no longer looking for us. My plans were to raise money and relocate to Ghana. I stole a locally made gun from my cult group during one of their meetings and left for Lagos. We normally keep guns at a place and share it when there is need for it. My plan was to sell the gun and use the money to buy ticket to Ghana. One of my age grade members advised me to relocate to Ghana and look for work there.

“Unfortunately, while I was on a bike heading to Badagry, policemen stopped us.  This was how they found the gun. I know that I used to be an armed robber but I have repented. You can ask my fiancée, Ada. It was because she had confirmed that I have changed that she agreed to marry me. It was robbery that landed me in SARS cell and now I am back. I just wanted to sell the gun.”

On his part, the second suspect claimed that he just took advantage of an opportunity to escape. “I was arrested in Victoria Island in 2019 while we were robbing one supermarket. I was brought out of the cell to be taken to court and they told me to stand by the counter while my IPO (Investigation Police Officer) was busy looking for my file. The whole place was crowded, so I decided to mix into the crowd. This was how I escaped, not exactly the way others ran away.

“I immediately found my way to Akala in Mushin and moved on with my life. I decided to stay in Akala because a lot of criminals that look alike are there. I attached myself to one mechanic in order to learn a handiwork but I needed money to survive. After a while, I formed another gang and we started moving around.

“It is very easy to buy or rent gun at Akala but I decided to go with fireworks and cutlass. We normally move to areas where we are not known. For instance, if we want to try traffic robbery, we will go to Mowe area in Ogun State or Badagry Road or even Ikorodu Road.

“We decided to try Ikorodu, an area close to Ijede Community. We went to three streets and selected eight houses that we entered. We would just light the fireworks and the people in the flat would wake up and panic. We would tell them to open or all of them would be killed.  Luckily, all the houses that we visited opened their doors for us and we took as much valuables that we could find. I got about six good phones and plenty of gold necklace and ring. I sold the three I-phones that I got for N20,000 each. We finished and everyone went to their houses. I never knew that one of my boys was arrested. “

“I had gone back and sold all those phones and jewellery before Adeniyi, my gang member brought the police to Akala to arrest me.  It was Adeniyi and the other boy known as Fatai Abiola that took the Plasma TV.

It was while they were moving with the TV that vigilantes saw them and caught them. I warned them but they refused. That was why I left them that night. I promise to repent this time because I have learnt a lesson. I suffered a lot inside the SARS cell, I don’t know which devil that took me back to crime again. I am sorry.”