Her mother, Doris Igwe, told PUNCH Metro on Tuesday that the family had been going through tough times, adding that both the Lagos State Government and the police authorities had abandoned them. 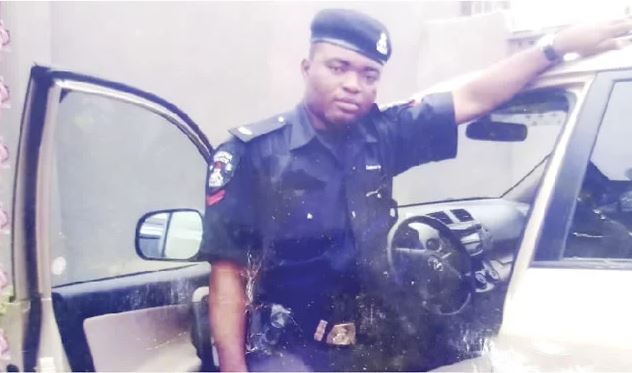 Goodness, a three-year-old cried in a feeble attempt to stop her father, Gabriel Igwe, from going out on October 21, 2020, the day he was lynched by #EndSARS protesters in Lagos, The PUNCH reports.

Ten months later, she has not stopped crying as she demands his return home.

Her mother, Doris Igwe, told PUNCH Metro on Tuesday that the family had been going through tough times, adding that both the Lagos State Government and the police authorities had abandoned them.

Doris, who spoke amid sobs, recalled that tragedy befell the family on October 21, 2020, around 10am when her husband left their residence in Ologunfe, Awoyaya, Ibeju Lekki area of Lagos, to withdraw money from an Automated Teller Machine.

The previous night, security operatives enforcing a curfew opened fire on youths protesting against police brutality at the Lekki tollgate, which heightened tension in the state.

The following morning, many police formations were attacked and burnt across the state.

Doris said, “When my husband was going out, my three-year-old daughter, Goodness, started crying and saying he should not go out. But he told her that he would soon be back and that we needed money to buy food. He rode his motorcycle, which had a police sticker.

“Meanwhile, some hoodlums had gone to the Elemoro Police Station to attack it, and in the process, the police killed one of them. So, they carried the corpse to bury. On their way back, my husband ran into them and they held him.

“They said he was a policeman, but he denied it. They searched him and saw his ID card, indicating that he was a spy policeman. They said he was the kind of people they were looking for, because he was among those giving the police information about them. They first burnt his motorcycle, after which they beat him to a stupor. They put about seven tyres around his neck and burnt him.

“I was at home with my children when a motorcyclist came to tell me that my husband was being beaten. They said I should not go there, because the protesters were looking for policemen and their wives and children.”

The 30-year-old said shortly afterwards, the hoodlums made efforts to enter their house, but some residents prevented them from doing so.

She said the family went into hiding, adding that it was the following day that some sympathisers sneaked to where her husband was burnt.

“They could not get any bit of his body; he was burnt to ashes. They picked some of it and that was what we took to the Lagos State University Teaching Hospital for autopsy. After some weeks, we took the ashes to his hometown in Nnewi, Anambra State, for burial,” the widow stated.

Doris, who was three months pregnant when the incident happened, said she was later delivered of a baby girl.

She added that her family had been in pain since the incident, adding that her first child, Goodness, had continued to ask for her father.

“She keeps saying her father went out and would come back. That is what she has been saying,” the widow added.

Doris’ sister, Stella Gbogboga, said the late Gabriel was attached to a construction company in Lagos, adding that some of his colleagues assisted the family in raising money for the autopsy.

She said while the family was not insisting on justice, it wanted compensation to support the wife and three infants Gabriel left behind.

Gbogboga stated, “We are even scared to ask for justice, because those who killed him are people in his neighbourhood. The place where he was killed was not far to the house. That was what gave him the boldness to go out, because he thought he was safe in his area.

“They made a video showing how they were butchering him as he begged them. They collected his phone and ATM card. They checked his phone and saw his picture, where he wore police uniform; they said he must die. The same truck used to carry the corpse of the person shot by the police was where they put him.”

PUNCH Metro learnt that the family had sought the help of the Femi Falana Chamber for legal assistance.

A senior lawyer in the chamber, Musa Abu, told our correspondent that the Lagos State panel on restitution for victims of police brutality rejected a petition on the case, saying it was outside its scope.

He said, “We wrote a petition to the police through the state Commissioner of Police and the Police Service Commission. They said the case had to go through a procedure; till now, we have not heard from them.

“We also wrote to the state governor, Babajide Sanwo-Olu, appealing for compensation. We have also not heard from him since we sent the letter in March 2021. This has given us a lot of worry. The man left behind a widow and three children.”

The state Commissioner for Information and Strategy, Gbenga Omotosho, said the government paid N10m each to the families of policemen who died during the protest.

He said if the deceased was not covered, it could be due to a communication gap between the family and the state Commissioner of Police, Hakeem Odumosu.

The Police Public Relations Officer, Adejobi Muyiwa, said the police forwarded the names of cops, whose deaths were recorded by the command headquarters, adding that they were also given posthumous promotion.

The spokesman for the Police Service Commission, Ikechukwu Ani, said he would make enquiries about the case, but he had yet to get back to our correspondent as of the time of filing the story.