Happiness said her wedding to Divine Okoh took place less than a month after they met on Facebook and the marriage ended after only two months plus, not three months as claimed. 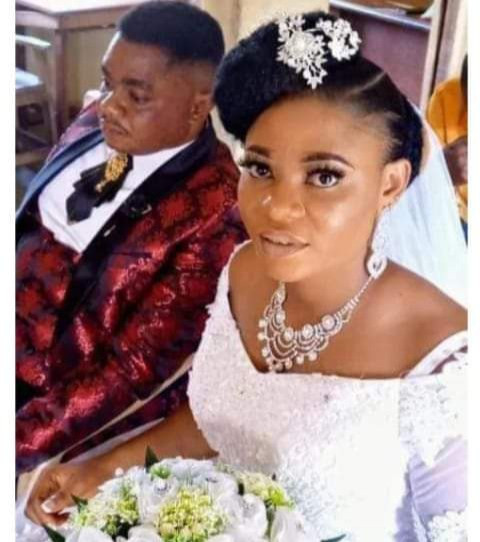 Following the reactions that her story garnered, Happiness Nwakanma, the woman who married a pastor she met on Facebook without dating him, has spoken to dispute the claims made by her estranged husband.

In a report by LIB, Happiness said her wedding to Divine Okoh took place less than a month after they met on Facebook and the marriage ended after only two months plus, not three months as claimed.

The post had been about a man who married a woman only 8 months after they met. Happiness said she commented that her own wedding will happen just one month after she meets her man.

She said the prophet sent her an inbox message on March 30, asking if she was serious about marrying immediately and she replied in the affirmative.

The following day, March 31, on his invitation, she told LIB that she left Port Harcourt for Agbor in Delta state to visit him. She slept over that night in his one-room accommodation and the following day, she told him everything about herself.

She said she told him she's a single mother who got pregnant while in SS1 and that her parents are separated.

He insisted he wants to marry her and, to show how serious he was, he asked for either of her parents' account numbers to send money and she gave him her mother's.

She explained that when she got home, her mother insisted she dates the prophet first and this led to a fight that attracted neighbours as she accused her mum of not wanting her to get married.

She denied Prophet Divine's claim that she was the one who forced him to get married right away by claiming her family doesn't allow dating.

She explained that he was the one insisting he's a pastor and doesn't date.

She also disputed the claim made by the Prophet that her mother told him to come and see them alone, without his family.

Happiness said it was the other way round. She said her family invited him to come and see them to collect the list but he came alone. When they asked why, he claimed his family are evil and never supported him.

Happiness said her family then told the Prophet that she is a student and if he's not ready to sponsor her education, he should go and return when she's done with schooling to marry her.

She said he insisted he wanted to marry her right away and will send her to school, so the wedding took place.

However, she said that after the marriage, she began noticing things he had hidden from her, including lying about his father.

She explained that it was only when her mother, who visited Delta state for her wedding, insisted she won't leave without seeing her in-laws, that Divine took them to see his father who was bedridden with stroke.

She said he had hidden that from them and no single member of his family was at their wedding.

She added that Divine also did strange things.

She told LIB: "Do you know I've never seen his nakedness for once? If he wants to have sex,  it's only at night, in the dark, and he'll just shift his boxers to one side. If he wants to bathe, he'll go into the bathroom clothed and come out clothed...

"I never one day see how my husband dick look like."

Divine said when it was time for her to resume school and she told him, he tried to wiggle out of sponsoring her education and told her to meet her family to sponsor her.

From then on, she said he began verbally abusing her, telling her that he made a mistake marrying a single mother when there are many available single women without kids.

Explaining how they separated, she said she was visiting her family in PH when the prophet invited her family to visit his church in Delta for a meeting.

Unknown to them, he had members waiting with weapons. On getting there with her mother, two uncles, and her brother on July 25, she said they were brutally attacked by members who accused her and her family of scamming their pastor. The attack left her mother bleeding profusely and her uncle had to be admitted to the hospital.

When she got home, she said the prophet threw her out without most of her belongings and she returned to Port Harcourt with her family.

She said he's been threatening her life and that of her family since then and has also been tarnishing her image.

Advising single mothers, Happiness said: "Instead of you to marry a prophet, I'll advice you marry a native doctor... Divine is a fake prophet."

She added: "Everything I say, I swear with my womb, it's the truth."

Listen to her speak in the audio below.