Buhari had on July 26 travelled to London, United Kingdom to participate in the Global Education Summit on Financing Global Partnership for Education (GPE) 2021-2025 and see his doctors. 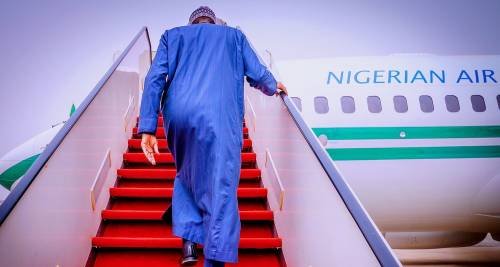 Nigeria's number one man, President Muhammadu Buhari is expected to arrive in Nigeria Friday evening, sources close to the presidency have told SaharaReporters.

Buhari had on July 26 travelled to London, United Kingdom to participate in the Global Education Summit on Financing Global Partnership for Education (GPE) 2021-2025 and see his doctors.

This came a few days after SaharaReporters exposed how the visit was planned ‘secretly’ to avoid rampage or any ‘embarrassing protest’ against the Nigerian President in London.

“He is on his way, the presidential flight took off from Stansted Airport, London, about an hour ago,” the source said.

On Thursday, the President visited former Lagos State Governor and National Leader of the All Progressives Congress (APC), Bola Tinubu, who is recuperating after a second surgery in the United Kingdom.

Buhari and members of his family routinely travel to the UK for medical treatment amidst the insufficient and poorly equipped hospitals in the oil-rich country.

In March, the Nigerian leader went to the UK for what the Presidency described as a “routine” check-up.

The trip sparked off a controversy as it coincided with the strike by the National Association of Resident Doctors (NARD).

To express their displeasure at the medical trip, some Nigerians stormed the Abuja House in London where the President lodged, asking him to return to the country.

Since he assumed office on May 29, 2015, Buhari has embarked on medical trips abroad at least five times, covering a period of no fewer than 180 days of the six years he has been in power.

The following is a timeline of the President's trips for medical treatment; between February 5 and 10, 2016, the President took a six-day vacation in the United Kingdom, saying that his doctors lived in England.

Between June 6 and 19, 2016, Buhari went on a 10-day medical trip to England for an ear infection surgery. He extended his trip by three days to rest.

On January 19, 2017, the President was back in London again on a medical vacation.

On February 5, 2017, he wrote to the National Assembly, seeking an extension of his London medical leave. Later on March 10, 2017, Buhari returned to Nigeria but didn't resume work immediately at Aso Villa.

The Presidency had claimed that "he was working from home."

On May 7, 2017, Buhari embarked on a trip to London for another medical vacation. He returned after 104 days – the longest he had stayed outside the country.

On August 19, 2017, Buhari returned to Nigeria, and it took him a while to resume work because rats had purportedly damaged furniture in his office.

The Presidency, therefore, announced that he would be working from home.

Also, from March 30 to April 6, 2021, the President embarked on another trip for a routine medical check-up in London.