The document, dating as far back as November/December 1938, contains letters and correspondence shared among British government officials. 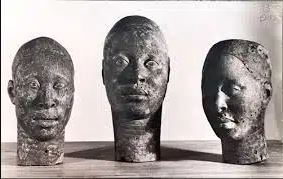 According to a report by SaharaReporters, an ancient document that was recently obtained has revealed some details about the origin and how artefacts of inestimable value were stolen from Nigeria by British People.

The document was compiled by Nasiru Aminu, a researcher based in Cardiff, UK.

The document, dating as far back as November/December 1938, contains letters and correspondence shared among British government officials only identified as Turnbull, Sidebotham, Clauson, Dawe, Moore, Tomlinson, Shuckburgh, Malcolm Macdonald, Harlech, among others.

In the document, some of the governors at the time and one Lord Harlech expressed concern over the abandonment of three antiques which were said to have been dug up from a place in Ile-Ife (in present-day Osun State) as they raised questions regarding the laws of Nigeria preventing the smuggling of antiques.

A letter was addressed to the governor of Nigeria to this effect. He, however, replied that there were no such laws in the constitution as of then.

A letter addressed by Lord Harlech on November 11, 1938, to one of the governors read, "I enclose a letter from Rothenstein, a photograph of three very remarkable bronze busts dug up in Ife in Southern Nigeria and a letter about them from a local writer whose name is naturally not divulged.

"When I was at the office, I spoke with Bourdillion when he was on leave about the better care and preservation of examples of old Negro art in Nigeria but he obviously was not interested.

"I think it is clear from the enclosure that nobody in Lagos is interested and that there will be continued export of these really important works of art unless you issue a direct order to the Governor to do something about it.

"As to these three particular heads, which to judge from the photographs are among the finest yet discovered they obviously ought to be in the Nigerian museum at Lagos or failing that in the British Museum here.

"As I expect, you know the finest of the Benin bronzes are in Berlin though there is a good collection in the Pitt Rivers museum down in Dorset. These though native work was executed centuries ago under Portuguese influence.

"The Ife bronzes are later, purely native and artistically more remarkable, much rarer and more valuable and I really think you have to do something effective to prevent what is technically an illicit trade and to insist that the Nigerian government should set up to their responsibilities in these matters.”

The letter from Rothenstein stated, “Dear Lord Harlech, I know your interest in things African. Recently, I was sent some photographs of bronze heads discovered in Nigeria, Today, the enquiry has been sent to me with a request that I should write to Sir Bernard Bourdillon to plead for the retention of valuable works of African arts in Nigeria.”

Williams’ response read, "Please see the attached letter which the S. of S has received from Lord Harlech. You will see that Mr Macdonald will like to dispatch to the Governor of Nigeria put up on the lines which Lord Harlech suggests, and perhaps this could be done."

Sidebotham, in a letter pointed the attention of others to an article by one E. H. Duckworth, Inspector General of Education in Nigeria from June 1938.

Williams also noted that it is very sad that such beautiful native works of art be neglected, but "it is only what one would expect to happen”.

Meanwhile, Turnbull in his letter dated November 23, 1938, queried if there are laws in Nigeria prohibiting the smuggling of antiques, "if any attempts are being made to 'smuggle' antiquities out of Nigeria, under what law is it prohibited?”

A response by Williams on 24th November read, "I hereby consulted history. There is no antiquities law in Nigeria...it is too much to expect such an enlightened interpretation... Possibly the reference to smuggling is a little inaccurate, it may mean an attempt to evade customs prohibition (not extant in this case) but the surreptitious exports of objects acquired illegally. These heads may be the property of the Ife native authority, some may have been clandestinely sold by dishonest who had dug them up or otherwise obtained unauthorised possession of them..."

On 24th November, another governor wrote, "The heads appeal to me more than they evidently do to Mr. Clauson. Apart from any intrinsic merit, what interests me is to see how close they are in spirit to some of the most sophisticated and self-conscious sculptors of Western Europe.

"In theory, I agree with Mr. Clauson that art has no frontiers, but it is an imperfect world: and in any case, there is much to be said for retaining the products of past native cultures in countries where we are trying to raise the cultural level.

"I suggest action as in the revised draft submitted. It does not appear to be really necessary to say anything further to Lord Harlech until we have the Governor's reply."

A letter sent by Malcolm Macdonald said, “I have etc. to inform you that my attention has recently been drawn to an article which appeared in the June issue of Nigeria titled, ‘Recent Archaeological Discoveries in the Ancient City of Ife’ by Mr. E. H. Duckworth, Inspector of Education.

“The bronze heads which are pictured in the illustrations to the article appear to work both of aesthetic merit and of considerable interest in African cultural history.

“Ife is evidently an important repository of the products of African culture but unfortunately, if the facts reported in the article are correct, it would appear that no adequate provision is made for the housing and care of these works of art.

"I appreciate that the Native Administration may be unable to afford to preserve them adequately. But the matter is clearly of more than local importance and I should be obliged if you would consider the question of whether it is possible for the Government of Nigeria to assume responsibility for the care, housing and retention in Nigeria of the Ife antiquities. In connection with this question I have been glad to note from paragraph 4(i) of Sir W.Hunt's despatch No. 555 of the 10th June that certain proposals for the preservation of antiquities are under consideration.

“It has been suggested to me that attempts are being made to ‘smuggle’ a number of the Ife bronzes out of Nigeria. So far as I am aware there is no law in force in Nigeria under which the exportation of antiquities or works of art is or could be prohibited and perhaps the reference is to the sale of these objects by persons who are not legally entitled to dispose of them.

“I shall be obliged if you could consider whether any special action is called for either legally or administratively to prevent or regulate the exportation of artistic works of this kind. It may be that the time has come when it would be desirable to enact in Nigeria some simple antiquities law and if you desired it, I could furnish you with examples of legislation of this kind that has been enacted in other dependencies.

“You will recollect some of the Benin bronzes are now in Berlin. The Ife bronze illustrated in Duckworth's article appears to be more remarkable artistically than those of Benin and I should certainly deprecate their export from Nigeria, except possibly to the British Museum.”