He said the Chairman of the Federal Civil Service Commission and some Commissioners at the Commission, falsely and unjustly dismissed the two of them. 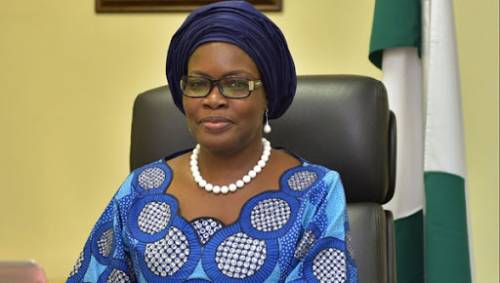 According to an exclusive report by SaharaReporters, a dismissed staff member of the Ministry of Foreign Affairs has alleged that Nigeria's former High Commissioner to Jamaica, Ambassador Janet Olisa connived with some top officials at the commission to falsely and unjustly dismiss him alongside another junior staff member.

The former employee of the ministry, who spoke with SaharaReporters, said the Chairman of the Federal Civil Service Commission and some Commissioners at the Commission, falsely and unjustly dismissed the two of them to cover up the atrocities committed by Olisa.

According to the dismissed staff member, he had been accused of appending his signature on a note verbale (memo) authorising the identity of a young man as a domestic worker to secure a work permit in the country (Jamaica).

However, he said this was done without his consent as it was not in his powers to sign a note verbale.

He said, “I work with the Ministry of Foreign Affairs and as a newly employed staff member, when you go on attachment programme, they, first of all, give you basic training in Nigeria and send you overseas for one-year training called attachment.

“I was among those staff members sent to Nigerian Embassies and I was sent in 2019 to Jamaica to work under Ambassador Janet Olisa. There was another junior officer, she was superior to me but she was a junior officer to the Ambassador.

“After a while, the other junior officer's tour of duty elapsed and she had to return to Nigeria, but she had her siblings there already, a brother, a sister, and her children. She was two steps above me. She was already working.

“Coming back to Nigeria became an issue for her because she has to secure visas for her siblings and she was able to secure visas for her sister and kids but she couldn't secure for her brother and she approached me to help her secure a visa for her brother and I was like, I'm a trainee and I don't have such power. I told her she could go to the Ambassador since they belong to the same tribe.

”She went to Ambassador Olisa and both of them, I don't know what they did because it was my first time going out on training so I didn't know how it works, but both of them connived and registered that brother using my identity to accredit him as domestic help, even without my consent.

”They accredited him as a domestic help to the foreign ministry of Jamaica so that he could get a work permit to enable him to secure a US visa to come back to Nigeria because according to them, you cannot have a direct flight from Jamaica to Nigeria, you have to pass through US, Brazil or London, UK, so they were finding an easier route.

”Without the Ambassador authorising the note verbale, the whole process would not be possible. After the Ambassador had written a note verbale to the foreign ministry and they had given him the permit, they now applied again for a visa. They insisted that it was not wrong, so after everything, the guy was able to come back to Nigeria.

“Later, the US Embassy in Jamaica raised an issue that the guy once had an issue with the US Embassy in Nigeria way back. It seems he had applied for a US visa some years back and he used a different identity, trying to give false information so they were now able to detect through his fingerprints that he is the same person with two different names. So, the US Embassy asked if the note verbale used to apply for a visa from the embassy in Jamaica was genuine? Was it issued by the embassy and the embassy said yes which is none of my business, it is only the ambassador and deputy ambassador that can issue the note verbale.

”I returned to Nigeria to resume work in Abuja only for the ambassador to start writing to Abuja petitioning me and the other lady that we conspired to send the guy to the United States. Whereas she was the one who signed the note verbale. They issued a query and I responded that I did not sign, so the ambassador ought to take responsibility alongside the other lady because they are senior colleagues.

“I'm a victim here, I'm supposed to petition both of them but because she is an ambassador, she has the power, you can imagine that she, who is a facilitator in the conspiracy was part of the decision making at the meeting where we were dismissed and the rule states that before you dismiss an officer, you should call him to defend himself but this did not happen. I was given a query, responded to it, and two months later, I got a dismissal letter. I have now written an appeal to the commission but I'm yet to get a response.

“The same ambassador who signed the note verbale to the ministry in Jamaica to give the young man a work permit is the same person who is now petitioning us. How I wish she did not authorise it, all these issues wouldn't have come up but she did it and now she's petitioning us. It is not fair.

“I was given a dismissal letter in March but I wrote an appeal in April. I told them, in the letter that it is not fair because they are accusing me of aiding the migration of the young man to the US. I stated in the letter that I did not have the power to authorise it. My sack letter was titled, 'Abuse of Note Verbale,' meaning I abused something I have no power over. I don't understand why I can be dismissed for it."

The dismissed worker said another ambassador in the ministry, who heard about the case, saw the injustice there" and has already "sent a petition too that the case should be looked into”.

Also according to the dismissed foreign affairs ministry worker, he has yet to get a reply to the appeal he filed over the alleged injustice.