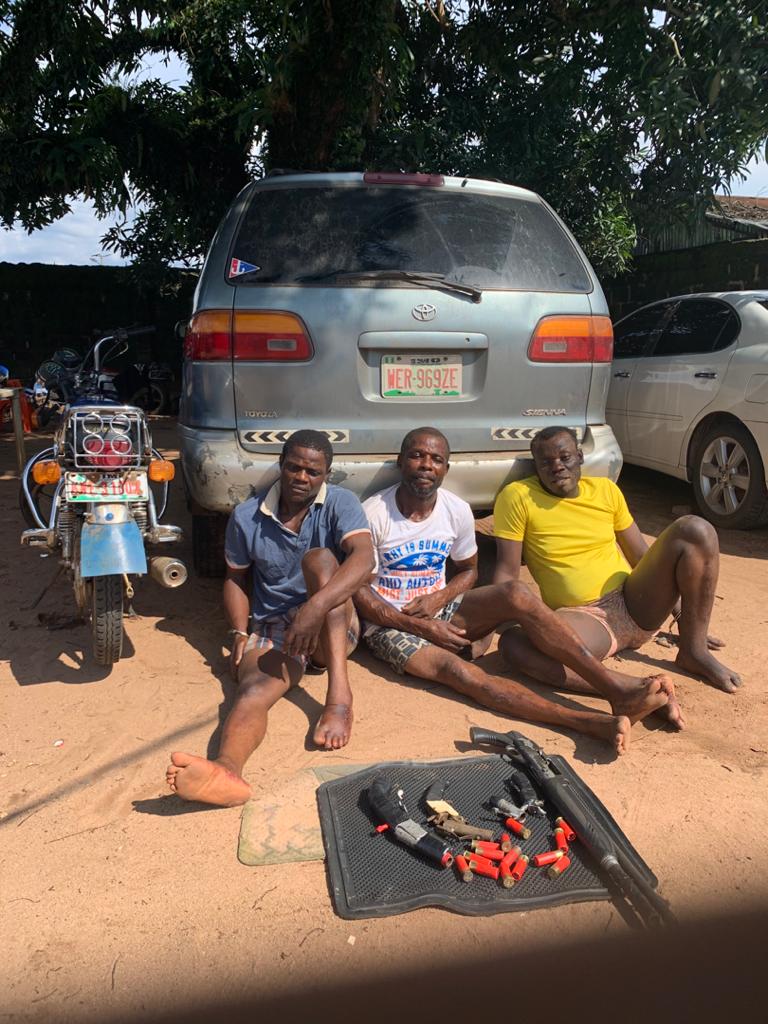 Imo kidnappers
A suspected kidnapper has been killed in a gun duel with men of the Nigerian police in Imo state. Five others were also apprehended by the police.
The incident happened at a forest in Ngor Okpala LGA of Imo State.
This was disclosed by the State Commissioner of Police Imo State Command, CP Hussaini Rabiu, in a statement made available to journalists in Imo on Monday.
He said “Sequel to a report of kidnapping, on 19/8/2021 at about 1800 hours, by one Obinna Odika ‘M’ of Human Race Estate Naze in Owerri North LGA of Imo State, that his wife and three children namely; Chinenye Odika ‘F’ age 27 years, Chika Mark ‘F’ age 9 years, Chisom Mark ‘F’ age 14 years and Princess Odika ‘ F’ age 6 months all of Human Race Estate Naze, Owerri North LGA of Imo State, were kidnapped by unknown gunmen in their Estate. ” Prayer To Be Rich
“The Imo State command’s Control Room immediately disseminated the report to all the police formations and tactical units for prompt interception and arrest of the kidnappers. ”
“On the same day at about 2230 hours luck ran against the kidnappers, when the ever-active Ngor Okpala police Division Patrol Team on receipt of the report intensified its patrols and in the process intercepted and arrested three members of the kidnapping gang namely; Udochukwu Edmund ‘M’ age 38 years of Umuezu Onitsha Ezinihitte in Mbaise LGA of Imo State, Uba Edmund ‘M’ age 45 years of the same address, John Okoroafor ‘ M ‘ age 33 years of Amucha Isu Njaba LGA of Imo State, and handed them over to the Command’s Anti-kidnapping unit for diligent investigation. ”
“On interrogation, the suspects confessed to the crime and led the Tactical teams to their hideout in a forest in Ngor Okpala LGA of Imo State. On sighting the police, they fired at them and the police retaliated. In the gun duel, one of the kidnappers was neutralised while two other were arrested with bullet injuries. On searching their hideout, one pump action gun, three locally made Pistols, fourteen rounds of live cartridges and three hundred and sixty-one thousand naira (#361,000.00) suspected to be part of the ransom money collected were recovered. Also recovered are one sea blue coloured Sienna vehicle with registration number IMO STATE, WER 969 ZE and a motorcycle with registration number KWE 310 QX used by the suspects in kidnapping the victims.”
“On further interrogation, the arrested suspects revealed where the kidnapped victims were kept and led the ever active and gallant tactical teams of the command to Central Primary School, Mbutu Okeohia in Ngor Okpala LGA of Imo State, where the four kidnapped victims were rescued safe, unhurt and have been reunited with their families.”
“The two injured suspects were taken to the Federal Medical Centre Owerri, for medical treatment. While efforts are on to arrest the remnants of the syndicate for prosecution. ”
“The Commissioner of Police, Imo State Command, CP Hussaini Rabiu psc, while commending the quick response of the command’s officers and men and the gallantry exhibited in the rescue of the kidnapped victims, advised the good people of Imo State to always report incidents promptly to the police for the timely intervention of the Command’s Quick Response Units. He also called on Imolites to assist the Command with credible information and to report any suspicious activity observed within their environment to the nearest police station.”
Top Stories