This is amidst the ongoing strike embarked on by the National Association of Resident Doctors in the country. 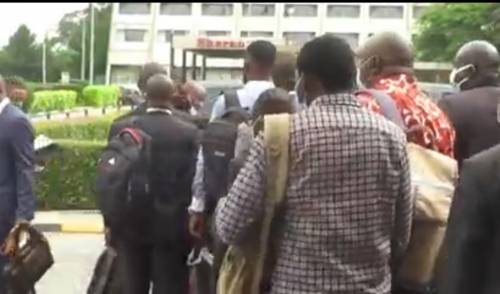 As many as 500 Nigerian medical doctors on Tuesday in Abuja participated in a recruitment exercise organised by the Saudi Arabia health ministry.

This is amidst the ongoing strike embarked on by the National Association of Resident Doctors in the country.

SaharaReporters learnt that the Saudi Arabian recruitment exercise was held at Sheraton Hotel and witnessed a large crowd of Nigerian doctors with different specialties such as anesthesia, ICU, pediatric surgery, family medicine, obstetrics and gynecology.

Others were; ENT, emergency medicine, orthopedic surgery, radiology, hematology and others.

Applicants were said to have been paid N10,000 as the application fee after which medical certificates, means of identification, and other documents were tendered.

Recall that the NARD had on August 2, 2021 embarked on indefinite strike action at the end of the union’s National Executive Council meeting in Umuahia, Abia State.

The strike is over the inability of the Federal Government to implement the agreements it entered with the union 113 days after it suspended the previous strike as a reason for the industrial action.