The Prime Minister of UK, Boris Johnson has confirmed the death of several US marines. 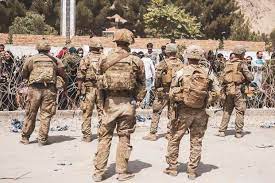 US marines
Several US marines have been confirmed dead in Afghanistan.
The marines died as a result of an attack on the Kabul airport in Afghanistan where evacuations from the country are ongoing.
The news saw its first official confirmation from UK Prime Minister Boris Johnson around noon eastern US time on Thursday.
Mr Johnson told reporters on Thursday that he “can confirm that there’s been a barbaric terrorist attack” in Kabul, adding that “members of the US military have, very sadly, lost their lives”.
His statement confirmed news regarding which the Pentagon and White House have remained almost silent all morning; multiple requests for Pentagon officials to confirm that US service members were killed were rebuffed by officials at the Department of Defense even as the foreign ministries of other countries including the UK have been more forthcoming.
John Kirby, a spokesman for the Pentagon, confirmed that Americans died and that at least two blasts occurred, with one taking place near the airport’s Abbey Gate, where many Americans used to arrive at the airport. His statement confirming the deaths came minutes after Mr Johnson appeared on TV and broke the news.
According to a statement from Mr Kirby, “a number” of US service members were killed; he was equally vague about the number of US troops injured.
Mr Kirby referred to the scene as a “complex attack”, while news organisations and officials from other countries have gone further and confirmed that they resulted from suicide bombings; a gunfight involving NATO forces reportedly erupted after the first blast occurred.
Top Stories