On entering the ‘Shine Ya Eye’ edition, Maria was identified as a wildcard alongside Pere. 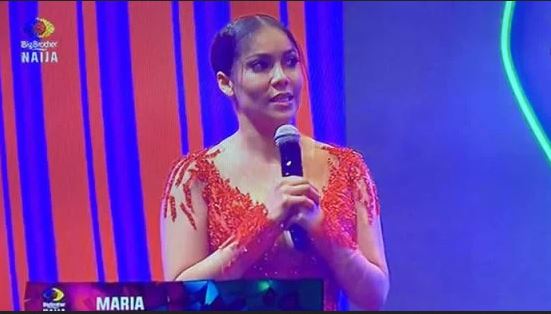 Maria, a Big Brother Naija Season 6 housemate, was evicted from the show on Sunday alongside two others – Sammie and JMK.

In her reaction, beautifully dressed Maria said her eviction was “surprising and unfortunate”.

“It’s unfortunate that I have been evicted. I thank you all for your phenomenal support. Thank you,” she said after her eviction.

Maria was the third housemate evicted from the reality show on Sunday.

On entering the ‘Shine Ya Eye’ edition, Maria was identified as a wildcard alongside Pere.

Reacting, Toke Makinwa @tokstarr said, “Maria did so well, gave us so much to talk about, she worked so hard and it’s sad to see her leave early. Not worried though, Nollywood awaits.”

@TEEKAYFINEST1 added, “Maria’s hate for white money and Angel killed her game, you might have a strong fanbase but be careful how you treat other people.”

@Delwynaji said, “We Marians will always be for Maria alone #BBNaija.”

Dr. Dípò Awójídé @OgbeniDipo added, “If her agency gets it right, Maria can still be the winner that didn’t win #BBNaija like Nengi, Tacha, and Erica. She’s got what brands are looking for. Position well. Cash out.”

@ogakelly said, “They really wanted Maria out of the show and they did that the first chance they got. Deliberately denied her immunity this week even when she deserved it. Decided to give her the reward the night she was leaving. It was targeted and it’s fine. Maria is going to be okay.”

@LiamZeeland said, “Maria’s exit proves that social media noise doesn’t mean anything when votes come to play. It shocks me.”