The group said Buhari is making a private visit to Uzodinma and not the entire Igboland. 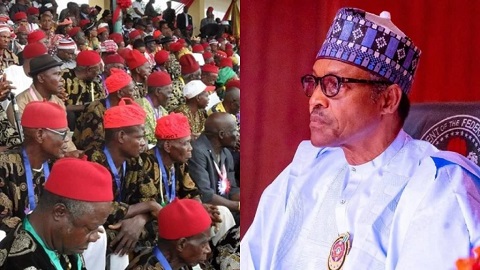 Ohanaeze not in support of Buhari's visit to Imo
The Ohanaeze Ndigbo Youth Council Worldwide, OYC has said its mind on President Muhammadu Buhari's visit to Imo state.
The group said Buhari is making a private visit to Uzodinma and not the entire Igboland. The group said this on Thursday while berating the Governor of the state, Hope Uzodinma.
Uzodinma had disclosed that Buhari would, apart from commissioning projects he completed in the State, meet with Igbo leaders and discuss issues affecting the zone.
But in a reaction, the President-General of OYC, Mazi Okwu Nnabuike, said Uzodinma’s claims were big slight on Ndigbo.
He said it was insulting that a private visit to Uzodinma’s Imo Government could gradually turn into a visit to Igboland by Buhari.
The enraged youth group said, “we had wanted to hold our peace over the noise about President Buhari’s visit to Imo State but under the prevailing circumstances, we are compelled to set the record straight.
“We want to start by making it clear that President Muhammadu Buhari is not visiting Igboland today, but is rather coming to see Governor Hope Uzodinma on a private visit that has nothing to do with the good people of the Southeast.
“Having said that, it is also imperative to state that Ndigbo are not scheduled to meet with Buhari in Imo State to discuss any issue whatsoever. The reason is simple- at no point did Igbo leaders meet where a decision was taken for such a visit, let alone agreeing on issues to present to Buhari.
“Secondly, Uzodinma, who is number one enemy of Ndigbo, a man that has bluntly refused to protect our people, but is holding tenaciously to open grazing of cattle, is not and will never be a rallying point for Ndigbo.
“Having said this, he is on his own and is not in any way representing the interest of Ndigbo, but is merely receiving Buhari as his private guest, which he is entitled to.
“Any Igbo leader going there is not representing the interest of Ndigbo and we will regard such a person as an enemy of the people.
“What we will not tolerate is the habit of dragging Ndigbo into such a Jamboree. Ndigbo are not ass lickers, we are one of the three major tripods under which this country is standing and for that reason, we are not going to go cap in hand begging anyone for what is our due, including the 2023 presidency which is not negotiable.”
The youth group equally said it was not happy that the members of the Indigenous People of Biafra, IPOB, were popularizing Buhari’s visit by proclaiming sit-at-home in the entire Igboland.
“What is the essence of even contemplating a sit-at-home in the entire Igboland because Buhari is visiting Hope Uzodinma in Imo State? They have helped Gov. Uzodinma in giving the visit such a colouration that it is for the entire Igboland.
“If at all they must declare a sit-at-home, it should have been in Imo State because Buhari is not visiting Igboland. They should not make this kind of very costly mistake next time, it has given this visit undue popularity,” Okwu added.
Top Stories