The pastor, who doubles as the landlord, had gone into hiding after some youths threatened to set him ablaze and vandalise his church as they blamed him for the incident. 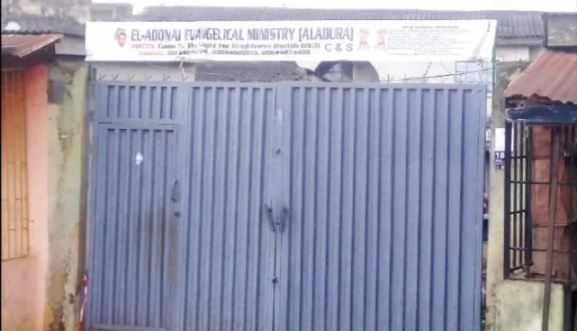 According to a report by The PUNCH, some angry youths on Jibowu Street, Abule Egba, Lagos State, have given the resident pastor of the El-Adonai Evangelical Ministry (Aladura), where four worshippers were electrocuted last Sunday, seven days to turn himself in or risk having the church burnt.

The ultimatum, according to the youth, began on Thursday after waiting for four days for him to show up.

The pastor’s whereabouts remained unknown six days after his church members were electrocuted.

The pastor, who doubles as the landlord, had gone into hiding after some youths threatened to set him ablaze and vandalise his church as they blamed him for the incident.

The electrocution reportedly occurred after a high-tension cable snapped while the victims were trying to mount a flag on the premises preparatory to the church’s annual thanksgiving service.

When our correspondent visited the scene of the incident during the week, the premises of the church appeared deserted and there were no signs of activity in the building. The gate, bearing the banner of the church with the motto: “Come to the light for the brightness (Isaiah 60:3)” was locked.

A resident, identified only as Baba, who spoke on behalf of the youth in the area, said they gave the pastor seven days to appear and explain what happened else they would torch the church.

He said, “If he is not guilty, why is he running? His phone lines are switched off. That man is not to be trusted. He should submit himself to the police and explain to us what happened there. I agree that he saved two victims who are now in the hospital, but why is he running? A clear conscience, they say, fears no accusation!”

“Losing four young men with promising future is really heartbreaking and it would be wrong if the case is swept under the carpet. I call on the government and the police to probe the matter properly and know the actual cause of the deaths. The young men cannot just die like that. Mama Ayomide who lost her young son has been crying since the incident happened. We want justice.”

A resident, who spoke on condition of anonymity, told our correspondent that three of the deceased victims had been buried.

She said, “Since the incident happened, he fled and hasn’t returned. We have sent some youths to monitor the house to see if he would sneak in to pick up a few things, but he has not come home to see what is happening. He is nowhere to be found, and we have not heard from him.”

Another resident, who identified himself as Ola, said the incident shook the neighbourhood, adding that the pastor rushed to the scene to rescue two victims.

He said, “We just heard a loud noise from outside and when we rushed out, we saw that the boys had been electrocuted. The pastor really tried to rescue them. He used a stick to help push them out of it. That was how two people were saved. He ran away when the crowd began to increase and people asked further how the incident happened, linking him to some superstitious activities.”

It was also learnt that the electric pole had been in the compound for about 10 years.

“Nobody knew this would happen. They were changing the flag after washing it and it tilted towards the pole and caused a spark,” another resident said.

Footwear of the victims, the pole and the flag were still on the premises as of the time our correspondent visited.

Our correspondent called the three numbers on the banner in front of the church but they didn’t connect. Text messages sent to the numbers had yet to be replied as of the time of filing this report.

However, the Police Public Relations Officer in the state, CSP Adekunle Ajisebutu, warned the youths from taking the law into their own hands. “Investigation is still ongoing on the matter,” he added.