The Inspector-General of police has given an order for an investigation to be carried out over the attempt to kill the Obi of Ogwashi-Uku. 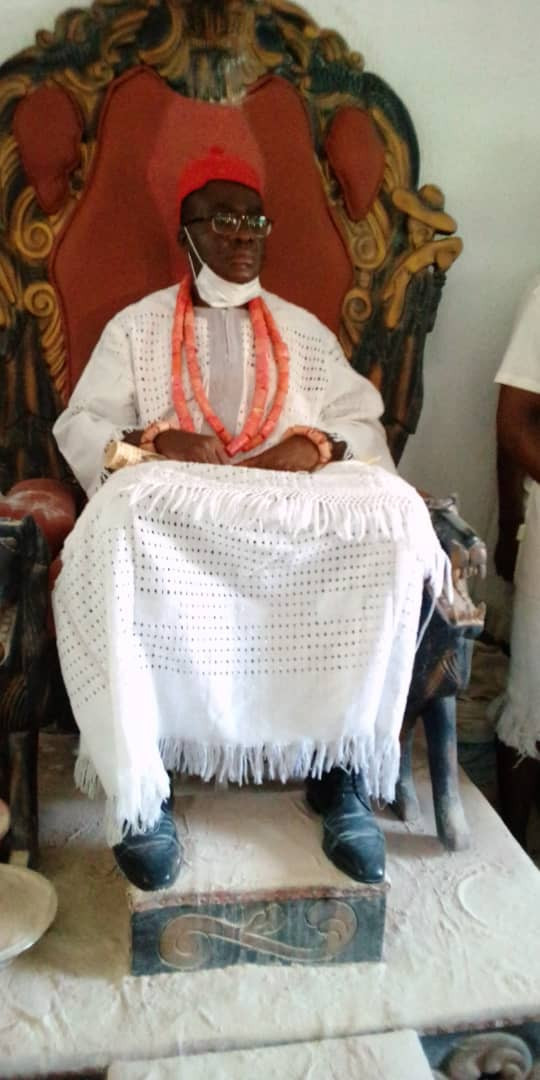 Obi of Ogwashi-Uku
Investigation into the attempted assassination of the Obi of Ogwashi-Uku, His Majesty Obi Ifechukwude Aninshi Okonjo II, by thugs suspected to be cultists has commenced.
This comes after the Inspector-General of Police (IGP), Usman Alkali Baba, directed the Commissioner of Police, Delta State, Ari Muhammed Ali, to investigate the circumstances surrounding the attack.
Recall that we reported that on September 18, 2021, some hoodlums attacked the convoy of Obi of Ogwashi-Uku, who is the brother of Director-General of World Trade Organisation (WTO), Dr Mrs Ngozi Okonjo-Iweala, when he visited Otulu Ogwashi-Uku, a farm settlement area in his kingdom to meet the residents and offer prayers for the growth and development of the community.
The monarch was accompanied on the visit by senior members of the Obi-in-Council, members of the press corps, officers from the office of the Area Commander Ogwashi-Uku, some soldiers from the Asaba Brigade Command, Ogwashi-Uku, vigilantes and some members of the Ogwashi-Uku community.
On their way back home, some thugs barricaded the road with logs and tyres to refuse the monarch access.
The fracas that followed led to the killing of one Cletus Opara, the burning of about five cars, an attack on the military officers, members of the Obi’s entourage and an alleged attempt on his life.
Confirming the development in a statement on Sunday, October 17, the monarch’s Palace Secretary, Prince Ifeakanachukwu Emordi, thanked the IGP for ordering full-scale investigation into the incident.
Emordi noted that the directive was laudable because the attackers of the Obi were apparently well known to the Delta Police Command and the Police Headquarters in Abuja.
According to him, the assailants were the same people who attacked a newly-installed Chief Onyema Igbokei 2020 in an attempted murder so they could continue to sell community land illegally in the Edo Ogwashi-Uku and Otulu Ogwashi-Uku areas.
"These same people were charged with attempted murder based on an investigation conducted by the Inspector General’s Monitoring Unit last year. The deceased, Mr Opara was one of the people investigated in last year’s attempted murder case and was facing charges in Ogwashi-Uku as a result of the investigation,” he stated.
Prince Emordi stated that the Delta State CP had declared some of the cultists wanted just a few months ago adding that in May 2021 the suspects were allegedly responsible for the death of an Assistant Superintendent of Police who was killed around Otulu.
He, therefore, urged the police to do a thorough investigation and not only identify all the people behind the attempt to assassinate the Obi of Ogwashi-Uku, but also their sponsors.
The Palace Secretary also urged members of the Ogwashi-Uku community, who had vowed to respond to the attack on their ruler to remain calm and allow the police to complete their investigation.
He restated the commitment by the Obi of Ogwashi-Uku not to permit Otulu Ogwashi-Uku to become a den and hideout of criminals who funded their activities by illegally selling Ogwashi-Uku communal lands.
The palace secretary also disclosed that the land speculator, who had been showing interest in Otulu land, had been identified and urged the speculator to cease doling money to the criminals who attacked the Obi of Ogwashi-Uku.
Emordi reminded buyers of lands in the Ogwashi-Uku Kingdom that all lands in Ogwashi-Uku were vested on the Obi of Ogwashi-Uku who is the overlord, trustee and custodian of all Ogwashi-Uku communal lands.
Top Stories