The 13-year-old girl, who died on October 18, 2018, was allegedly molested, defiled, drugged and abused from age five until she died. 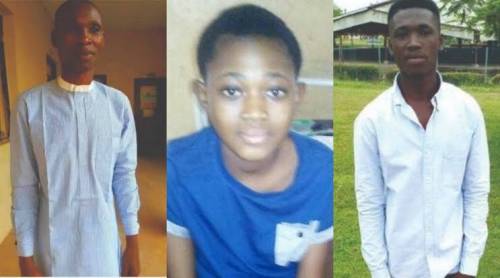 The little girl was abused and killed by relatives
A mother has cried for help three years after her 13-year-old daughter was abused and killed by relatives.
Rose Abah, mother of the late sexually abused Elizabeth Ochanya Ogbanje questioned if there is any more hope for justice three years after the loss of her child.
According to Sahara Reporters, the 13-year-old girl, who died on October 18, 2018, was allegedly molested, defiled, drugged and abused from age five until she died in the hands of her 52-year-old uncle, Andrew Ogbuja, a lecturer at Benue State Polytechnic, Ugbokolo, and his son, Victor.
She died shortly after she fell ill to a disease later diagnosed as Vesico-Vaginal Fistula (VVF) and was buried on November 2, 2018.
In a recent interview with BBC Pidgin, Abah explained that since Ochanya's death three years ago, she has been unable to close her eyes to sleep.
Rose Abah had not gained formal education but she wanted her daughter to be educated.
"Ochanya's death has caused me so much pain. I brood over the issue so much that it has turned me into a vegetable. Can't you see how I've become thin every day? Even if I eat, it doesn't work well in my body. I know there are people who have lost children but the way my child died, when I think about it, I feel so much pain in my heart,” the grieving mother said.
Ochanya Ogbanje was born in 2005 and was living with her parents and other family members at Ogene-Amejo in Benue State. She is the last child of 11 children. She was 5 years old when her mother, Rose and father, Michael Ogbanje agreed that she should start school.
"Ochanya was a very peaceful child who had a passion for education and she loved school. She was very intelligent and the kid was performing excellently in school before she died.
"It's not as if we have no schools in the community but the one we had, there were issues there which caused the school to be shut in 2021. So we decided to allow her school at Ugboloko,” she said.
Ochanya's mother is a farmer while her father is retired.
According to them, while they may not be wealthy, they aren't begging to feed. There were also dispelled rumours circulating in some quarters that Ochanya had gone to seek home help at the time.
Rose further explained that Ochanya was taken to the house, Felicia Ogbuja to seek education. Initially, everything was going on well for four years until issues started coming up.
Ochanya was living with the Ogbujas (Aunty Felicia, her husband Andrew and five of their children) in the same house for four years. She was attending school in the house and also helping with house chores.
At age 8, her cousin Victor allegedly began to rape her and when Victor's dad, Andrew Ogbuja who was a College lecturer at Benue State Polytechnic got to know about it, he allegedly joined in the abuse.
"It was in 2012 Ochanya's sickness started. We took her to the hospital at Okpoga. It was there she got medical attention. As time passed, she recovered and we left for home. Later, she took ill again," Abah said.
She stated that Ochanya found it difficult to control her urine again as she started to wear diapers for but her condition did not improve. According to her, Ochanya was taken to various hospitals and religious houses yet there was no result.
"I was at her bedside when she wanted to die. I couldn't bear it again - My heart shattered, broke and my life was in ruins. I couldn't control myself. I ran to one toilet in the ward so I won't see when she wanted to take her last breath.”
The parents said they took her to Restorer of PathCare Foundation at Otukpo, Benue State.
Since Ochanya's death, there have been a series of protests by various civil society groups calling for justice for the victim across the country.
The National Agency for the Prohibition of Trafficking in Persons (NAPTIP) had on November 23, 2018, arrested Felicia Ogbuja, aunt of the victim, for conspiracy and having knowledge of the repeated rape of the late teenager without reporting to the appropriate authorities.
Andrew Ogbuja's trial had started since 2019 at the Benue State High Court which on a four counts which is based on alleged rape and culpable homicide.
The prosecution counsel, Peter Ukande called upon eight witnesses and the Defence Counsel, Abel Onoja has opened his own case.
Andrew Ogbuja has pleaded non-guilty of any of the charges. The court has adjourned the matter to November 12, 2021.
At the Federal High Court, Makurdi, Felicia is facing separate charges for negligence due to alleged failure to take action to stop the alleged sexual exploitation of the minor by her husband, and son, Victor.
Ochanya's father, Michael Ogbanje said the adjournment of the court hearing is causing more pains.
"This adjournment makes me and my wife and other people travel from the village every time despite the bad condition of the road and we don't even have the money and we don't even know when the matter will end.”
As for Rose, Ochanya's mother, she explained that she will not rest until she gets justice.
"I am tired of this life. I haven't seen anything that will make me happy as I won't be able to see Ochanya my again. I want justice, it is that time I will get peace."
Top Stories