The meeting with Tinubu was held at his Bourdillon residence in Ikoyi. 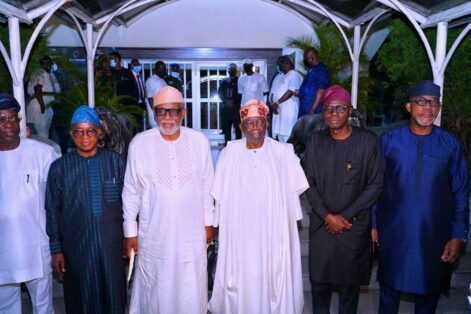 South West governors posing with Bola Tinubu
National leader of the All Progressives Congress, Bola Tinubu has welcomed Southwest governors on Tuesday night at his home in Lagos.
The meeting with Tinubu was held at his Bourdillon residence in Ikoyi.
The Southwest governors decided to visit Tinubu after their meeting at the Lagos House, Marina.
The governors present are:  Gboyega Oyetola (Osun), Babajide Sanwo-Olu (Lagos), Dapo Abiodun (Ogun) and Rotimi Akeredolu (Ondo), while Governor Seyi Makinde was represented by the Deputy Governor, Mr. Rauf Aderemi Olaniyan.
Ekiti State Governor, Dr. Kayode Fayemi excused himself after the meeting of the governors at the State House, Marina and did not go with others to Bourdillon.
It was gathered that Fayemi had an urgent assignment to attend to, which was why he did not go with the others to Tinubu’s house.
The governor had visited Tinubu while he was in London along with Akeredolu.
During the visit, Akeredolu said they came to welcome him back home and wished him well.
The Ondo Governor had recently said they were waiting for Tinubu, who is their Cappo to come back from London before they could take decision on the 2023 presidency.
Top Stories