The inmates escaped after unidentified gunmen attacked the correctional centre at about 10pm on Friday, October 22. 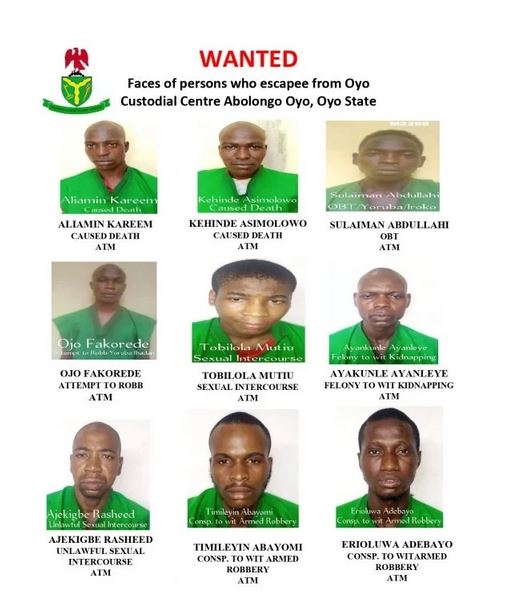 The photos and names of 122 inmates who escaped from the Abolongo Custodial Centre in Oyo State have been released by The Nigerian Correctional Service on Wednesday October 27.

The inmates escaped after unidentified gunmen attacked the correctional centre at about 10pm on Friday, October 22.

Minister of Interior, Rauf Aregbesola had on Sunday said 446 out of 907 escapees in the Abologo correctional facility in Oyo State have been recaptured by security agencies.

"As at the last count, 446 of the escapees have been recaptured, leaving 392 still at large. We want to assure Nigerians that the service has an updated database of the escapees which includes their biometrics. We are sharing the database with all security agencies in the country including Interpol, so those who escape our recapture efforts can be nabbed," the Minister stated.

“To those on the run, be assured you have nowhere to hide. You can run, but you can’t hide. We’ll fish you out! We are publishing details of those who escaped in the mass media so the public can assist in that effort." he added.