They were abducted by armed men while they were embarking on a journey.

One of the victims, Suleiman Zailani

Thirteen employees of Zaria Local Government in Kaduna State have been abducted by bandits at 5 pm on Monday, November 8, between Giwa and Zaria, while they were travelling on a bus.

Reacting to the abduction, the Coalition of Northern Groups, CNG, Kaduna State Students Wing, said that most of the victims are parents of their fellow students in higher institutions.

In a statement signed by the Kaduna State Coordinator, Jamilu Musa, the students warned that they would embark on a mass action to shut down Zaria if visible action is not taken to secure the release of the captives in seven days.

"It is unfortunate that so far, our Governments, both federal and state have glaringly failed in the vital area of providing public safety and security of lives and properties of Nigerians.” CNG said.

They blamed “the audacity with which these criminals carry out their atrocities with ease on what they called huge vacuum in the political will and capacity of the authorities to challenge them.”

"The CNG Students Wing notes with utter perplexity and dismay the emerging trend of abandoning innocent citizens, particularly students and their parents to the mercy of the kidnappers without any sense of emergency from the authorities

"While we feel the pain of the families, friends and relations of the kidnapped members of staff, we demand immediate action from the relevant authorities for their release, alive and safe and for government to demonstrate more commitment to the protection of citizens’ lives and properties

"We finally place the authorities on notice that failure to take visible and concrate action towards the safe rescue of all the parents and students involved in this latest incident and all others in captivity within the next one week would attract a mass action to shut down Zaria and compel positive action,” the statement concluded. 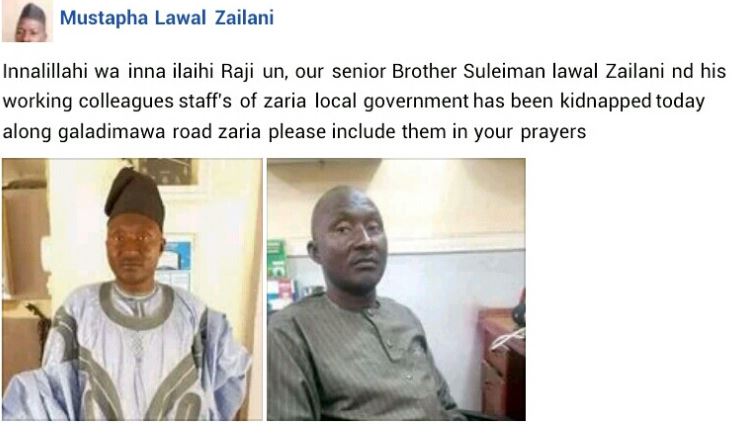