Sophia shocked the audience after she peed on the man's face during her performance at the Welcome to Rockville festival. 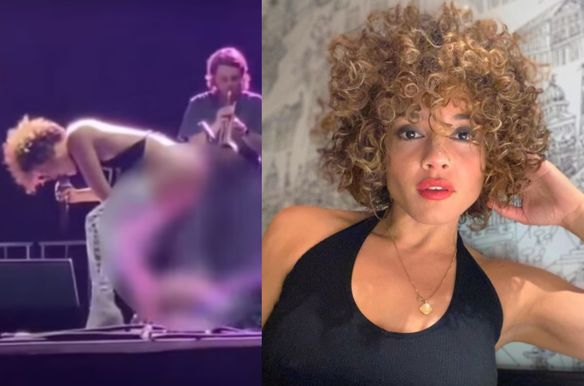 Sophia's band has apologised
A rock band, Brass Against in America has been forced to tender an apology over the disgusting behaviour of its lead singer, Sophia Urista.
It happened that during a live concert, Urista shocked the audience by urinating on a fan's face.
The incident happened during the Welcome to Rockville festival at the Daytona International Speedway Florida, Sophia.
She was performing a cover of Rage Against the Machine’s song, Wake Up, when she invited the man from the front row to come up on stage, The Sun reports.
The man, who appeared happy after he was invited, proceeded to lay down on the stage and let the urine flow onto his body and head.
The 'strange' scene lasted for a few seconds before the man got up and spewed up some of the urine in the direction of the audience.
The stunt sparked outrage on social media, with the New York band forced to apologise, explaining that the singer “got carried away” and that it’s “not something you’ll see again at our show”.
“We had a great time last night at Welcome to Rockville,” Brass Against tweeted. “Sophia got carried away. That’s not something the rest of us expected, and it’s not something you’ll see again at our shows. Thanks for bringing it last night, Daytona.
Wtf white people be doing the most
🤯🤯🤯🤯🤧🤧🤧🤧 Sophia Urista pees on Fans face live on stage pic.twitter.com/cQNvBDrsdb
— Pendee (@pendeegh) November 14, 2021
Top Stories