When reporters got to the scene of the collapsed building, yesterday, it was discovered that the land where the construction was ongoing is a swampy area. 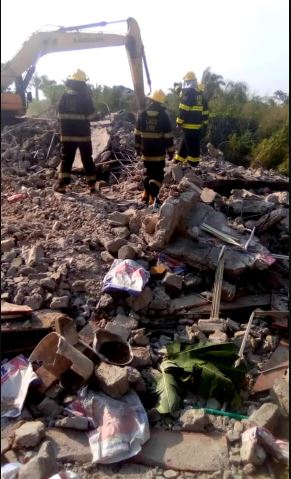 According to a report by Vanguard, the one-storey building at Sunny Filled, Flour Mills, Estate, Magbon, Badagry, Lagos that collapsed, killing four persons and injuring five others on Wednesday, was an old bungalow, before the owner decided to raise it to a storey building.

This came as one of the survivors narrated that he was eating when the building caved in.

When Vanguard got to the scene of the collapsed building, yesterday, it was discovered that the land where the construction was ongoing is a swampy area.

Also the rubbles of the building indicate that the building was an old bungalow converted to a storey building. And the reinforcements used were both old and new. Most of the iron rods used were 10mm instead of 16mm.

Speaking to Vanguard at the scene, Okpe Rahmon, an official of the Lagos State Material Testing Laboratory Monitoring and Enforcement, said: “We are here to pick samples from the building to enable us carry out further investigation to confirm those primary causes, in terms of materials, to find out what was responsible for the collapse. The test will confirm if it was caused by inferior materials and other related issues.”

However,  neighbours confirmed that the collapsed building was formally an old bungalow before it was converted to a storey building.

Rahmon added: “It was on this bungalow that the extra floor was added, technically that is absolutely wrong because the foundation for the bungalow couldn’t have carried extra load. So that is like sinking and compressing the existing building.

“So far, from our preliminary site investigation, we haven’t taken some of the samples to the laboratory, we can see that from the rubbles of the steel used, we haven’t seen 16mm, we have only seen 10 mm and 12mm.”

An official of Lagos State government, who spoke on the condition of anonymity, said: “I received the news of the building collapse, at 2p.m., on Wednesday. I rushed to the site because I reside here, the police and other rescue operatives were already here. The people doing road construction at the expressway used their excavator to rescue those under the rubbles.

“They actually rescued nine because the 10th person was outside the building but he sustained minor injuries. Four of the construction workers died, who were actually plastering the decking of the building when it collapsed, they brought them out.

“We took those who were still alive and some who were unconscious to the hospital. The other four people died before the excavator could rescue them.”

When Vanguard got to Eucharistic Heart of Jesus Hospital, where the survivors were receiving treatment, their relatives were hostile to newsmen over alleged media publication of the incident.

A middle aged man, who spoke as their representative, said they would only speak to newsmen when the LCDA chairman of Olorunda comes to the hospital.

However, when Vanguard finally had access to the survivors, two of them, who were in the same ward refused to talk, while two others, Alhaji Abdul and Ifeanyi recounted how they narrowly escaped death.

Alhaji Abdul, said: “We were inside the building, I was eating when the building came down. I am unhappy with the fake reports making rounds on social media and the mainstream media, they said they took us to Badagry General Hospital while we are still here.”

“I don’t have anything to say, because the people who died worked with me. Usually, when we get construction jobs, we travel together even to the East.

On his part, Mr. Ifeanyi, a 38-year-old indigene of Eungu State, said: “I was inside the building working when it collapsed. That was the first time I am working with them (other workers). It was Alhaji Abdul that called me to do the work, I am a bricklayer. I am from Enugu State, I am not married. When it happened, we were nine persons inside the building, including Abdul’s brother.”

Vanguard learned that the survivors were supposed to have gone to Badagry General Hospital for their x-ray and scan but were waiting for the LCDA chairman to arrive before they would be transferred to the hospital.