Secondary Schoolmates Who Ridiculed Me When I Became Blind Were Shocked I Bagged PhD – UI Scholar, Biliana Okoli


Bibiana Okoli who has now bagged a doctorate from the University of Ibadan, speaks about her life and struggles. 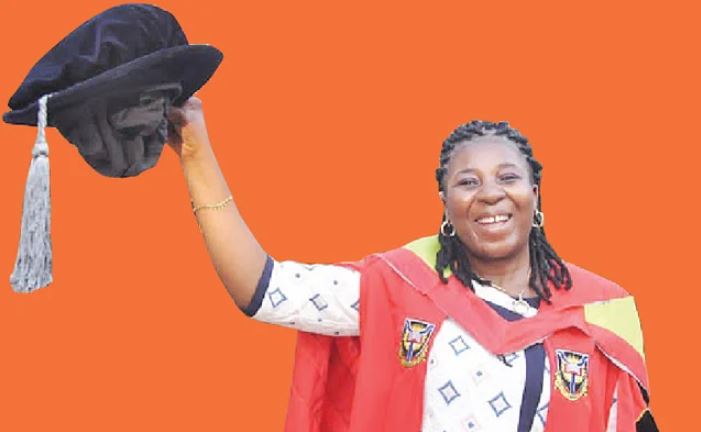 Bibiana Okoli, a visually-impaired scholar, who on Wednesday, November 17, 2021 bagged a doctorate from the University of Ibadan, Oyo State, speaks to ALEXANDER OKERE about her struggles and triumphs

There are photos of you on social media showing that you recently got a PhD from the University of Ibadan, Oyo State. When were you awarded the doctorate and in which discipline?

I defended my PhD thesis on January 15, 2020, but due to COVID-19, the convocation was not held. So, yesterday, November 17, 2021, the ceremony was held. I received a PhD in Special Education, with specialisation in the Education of the Visually-Impaired.

Many Nigerians are celebrating your recent achievement. How did you feel when you completed the academic requirement for the doctorate?

I felt happy that I was able to overcome disability because in every disability there is an ability. I give God all the glory for making it possible for me.

What were the trying moments in your academic career journey?

There were many. When I started university education, we didn’t have our books in Braille, so we had to buy the print copies of the books and send them to Lagos for transcription in to Braille. That doubled the cost of our study materials. Also, before I entered the university, my family did not want me to travel to Ibadan due to the distance. The Joint Admissions and Matriculation Board did not transcribe my examination questions into Braille and that was another challenge. It was in my third attempt at the Unified Tertiary Matriculation Examination that God took control and I passed with a high score. It was at that time that my family understood why I chose to study at the University of Ibadan. Before I took my first UTME, I lost my father. I also lost my younger brother who was the first son. I am the first child and daughter of my parents. My father showed me all the love I needed. I never thought he would leave us that early.

Something else happened to me that I will never forget. On January 13, 2013, when I was offered admission for my PhD, on my way to Ibadan from Anambra, we were robbed at Benin Bypass by some gunmen. After robbing us, they set our vehicle ablaze. They shot the driver but it wasn’t enough for them; they later severed his head. Other passengers of the vehicle found a way out but I was the only one left with the dead driver and the burning bus.

Did the passengers and robbers know you were visually-impaired?

One cannot easily know I am visually-impaired because my condition is not congenital.

How did you reach your destination?

God just sent an ‘angel’ because I had lost every hope, said my last prayer, and asked God to take my soul. This happened two weeks after I lost my brother on Christmas Day (in 2012). I wondered what would have happened to my mother if I did not make it alive. But God sent somebody; I heard a voice saying, ‘Sister, give me your hand,’ and I swung my hand towards the direction of the voice. The person pulled me out of one of the windows of the burning vehicle and that was how I escaped. That experience motivated me to write a research paper titled, ‘Security Emergency in Nigeria: Ordeal of Persons with Visual Impairment’. I presented it at a conference in Kenya.

How did you lose your sight?

It just started as an eye problem when I was about eight years old. I did not notice it but my mother did. In our home, it was a tradition for every child to present their work to my parents. On that fateful day, my mother was going through my work when she observed that I wrote above the margin of my exercise book. Even when she tried to draw my attention to her observation, I could not see it. That was when she realised there was a problem with my vision. When my dad returned from his trip, she explained to him and they took me to a hospital to see an ophthalmologist who gave me some eye drops but instead of my vision getting better, it deteriorated. The glasses I was given did not help. Other ophthalmologists we visited in Enugu, Ebonyi and Kaduna states could not identify the problem. They told me to manage and live with it – man spoke but God had the final say.

Did your parents think the problem was beyond the physical as some people may have thought?

No, they did not think like that. My mother was learned and knew the best thing to do was to take me to a hospital.

Was it easy for your peers in the neighbourhood to understand you could not see?

It was not easy. I suffered stigmatisation because I was already in school when the problem started. I barely managed. All my friends at school, even the ones I used to teach in the class, deserted me. When most of them saw me coming toward them, they hid but I did not know why. I was an object of ridicule to them. I was 14 years old at that time.

Do you think some of your ex-classmates who ridiculed you in secondary are aware of your recent academic achievement?

For now, a few of them are; it is all over the social media. They are shocked by my achievement.

You were said to have dropped out of school due to the condition. Was it a decision your parents took?

It wasn’t their decision. Something happened. I was taking the Senior School Certificate Examination at Girls High School, Abakaliki, and on the day I was supposed to take Geography, which was my best subject, my colleagues hailed me because they knew my capacity. But unfortunately, as I began to shade the computer sheet, I thought I was shading the boxes until the chief invigilator, who was going round the hall, got to my desk and observed that I was shading outside the box. But instead of him to call my attention to it, he gave me a knock on my head. I was devastated, burst into tears, and asked him what I had done. He had acted before telling me what I had done wrong. I couldn’t continue. It was a sorrowful day for me. I had to leave the hall and return to the hostel. When my classmate returned to the hostel, they expected me to tell them how I answered the questions. But when I explained what happened and they saw me crying, they cried as well. The issue was reported to my parents and I was withdrawn from the school.

Were you later taken to a special school since your sight was affecting your ability to learn?

Yes. I was taken to St. Joseph Centre for the Visually-Handicapped, Obudu, Cross River State, but that was several years after because when the incident happened, it threw my family into sadness. None of us had the knowledge of special needs education so we wallowed in ignorance until I met a reverend sister who gave us the information about the centre.

Was it easy for you to adapt?

It was a different world entirely; it was like moving from the world of light to the world of blindness. But God gave me the grace to accept it through prayers.

Did you receive your first degree from UI?

Did you secure a job after your first degree?

Did you try to?

I told God I would never work with my first degree; that I would reach the apex of academic study. That was my resolution. God granted me my heart desire.

Many people find it difficult to enrol for a higher degree for various reasons. What was the driving force behind your decision to study for master’s and doctoral degrees?

We are lovers of education in my family. One of the things our parents promised to give to us was education. As a child, I loved education and socialised with educated people. When I began the rehabilitation and orientation programme at St. Joseph Centre for the Visually-Handicapped, I worked in a nursery school but my experience with my supervisor was not palatable.

Did your supervisor call you names?

She did not call me names but her attitude toward me was bad. I stood in for teachers who were absent but my supervisor deprived me of the benefits that accrued to teachers for the five years I worked with her because I was not a qualified teacher.

How did you find the degree programmes?

My family and friends supported me and I made remarkable achievements. For the first three years of my doctoral degree programme, I received a scholarship from the university. I also received an award at a conference in Poland by the International Association for Special Education. I am a member of that association. I have travelled to several countries for conferences. I have been to Kenya, Ghana, Cameroon and Canada. To an extent, visual impairment gave me the opportunities. It opened doors for me.

What would you say being blind has taught you about life?

I have learnt many lessons. First, if one cannot persevere in life, it would be difficult. One who doesn’t have a good relationship with God, would be sorry because there are many obstacles on the way. When one has faith and confidence in God, He would show them the way. One should have it in mind that they cannot be loved by all.

With a first degree, a master’s and a doctorate in the bag, what is your next goal?

I plan to become a lecturer and teach others what the university has taught me.

Have you received any job offers in that regard?

No. But I also intend to start a non-governmental organisation to assist persons with special needs.