The suspect was said to have committed the offence at Agbabu community in the Odigbo Local Government Area of the state. 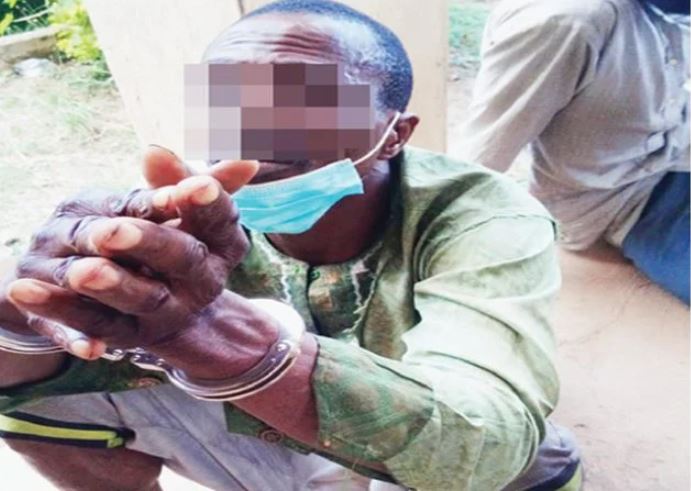 Festus James, a self-acclaimed prophet, has been arrested by men of the Ondo State Police Command.

The man was nabbed for allegedly raping a woman with eight months’ pregnancy.

The suspect was said to have committed the offence at Agbabu community in the Odigbo Local Government Area of the state.

Parading the suspect at the command headquarters in Akure, the state capital, on Thursday, the state Police Public Relations Officer, Mrs Funmilayo Odunlami, said James had carnal knowledge of the woman under the pretext of performing spiritual deliverance for her.

She said, “James from Ibadan in Oyo State went to Agbabu village via Ore, claimed to be a prophet and that the holy spirit directed him to have a three days holy ghost revival in a church in the village.

“The next day, the prophet claimed to have seen a vision concerning a 22-year-old lady who was eight months’ pregnant and told her to wait behind after the programme.

“He took the pregnant lady into one of the rooms in the mission house under the guise of delivering her from an evil spirit and had carnal knowledge of her. The suspect confessed to the crime.”

The PPRO said the suspect would soon be charged to court.

James, who admitted to having sex with the victim, however, denied raping her.

He said, “I had sex with her truly, but it was not r*pe; I did not r*pe her. I always went there for revival. But honestly, I didn’t know what came over me that caused me to do that. It was the work of the devil.”

In a related development, the Cross River State Police Command has arrested a medical doctor, identified as Samuel, for allegedly sexually assaulting a 15-year-old patient.

It was gathered that the doctor allegedly assaulted the victim on October 22, 2021, while on admission for three days at his clinic in Calabar.

PUNCH Metro learnt that Samuel had requested the victim to be unclad while examining her and assaulted her in the process.

The principal counsel for the Basic Rights Counsel Initiative, James Ibor, who petitioned the state Commissioner of Police, Aminu Alhassan, over the matter, noted that Samuel sexually assaulted the teenager throughout her stay in the hospital.

Ibor, in the petition dated November 9, 2021, urged the police to investigate the case and ensure that justice was served.

The petition read in part, “According to our client, Dr Samuel led her into his consulting room and instructed her to totally undress, but when she hesitated, he insisted and said all doctors who examine or check a patient with difficulty in breathing require the patient to fully undress for proper examination.

“He then assisted her to pull her clothing. He thereafter placed a stethoscope on her chest several times and after a few minutes dropped it and leaned his weight on her and started groping her breast while moaning.

“The assault continued through the three days she was on admission at the hospital. Sir, we trust you will use your good offices to investigate this case in the interest of public safety and ensure that justice is served.”

However, our correspondent learnt that the suspect was arrested by the police on Wednesday.

The state Police Public Relations Officer, Irene Ugbo, said she was not aware of the incident as she just came back from a journey outside the state.

She promised to find out on Friday when she returned to her office.