Nigerian Man Caught With Drugs Worth $1.34million In India (Photo) 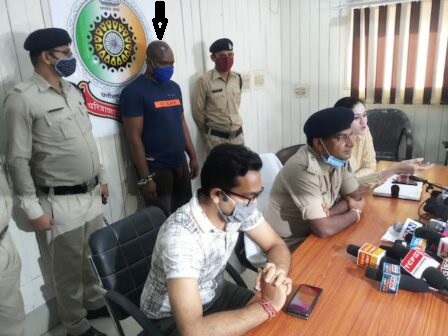 Akuche arrested in India
Security operatives in India have apprehended a Nigerian drug dealer, Anthony Akueche in Mumbai, India.
He was allegedly possessing commercial quantities of Mephedrone (MD) and cocaine, collectively worth Rs 5.36 crore or $1,340,000.
Akueche, according to Indian Express newspaper was arrested by officials of the Mumbai Police Crime Branch Unit 4 during the wee hours of Sunday in Wadala.
He came from Delhi to sell the drugs.
Acting on inputs that a Nigerian national was headed to Anik bus depot on Chembur-Sewree road in Wadala to sell the contraband, a team of crime branch officials laid a trap in the area, officials said.
Around 2.50am, they spotted the man carrying a bag near the spot, they added.
The team caught him and checked his bag, which contained five “ladies’ purses”.
The purses seemed newly bought, were big in size and of different colours; an additional layer of cloth was knitted inside the purses to hide the drugs, officials added.
The officials found 4.96 kg of MD worth Rs 4.96 crore along with 198 grams of cocaine worth 39.60 lakh on him.
Akueche who is 39, was booked under the NDPS (Narcotics Drugs and Psychotropic Substances) Act and produced before a court.
He was ordered to be remanded in police custody till November 25.
Top Stories