The victim made a report to Serious Crimes Unit office that the accused attempted to kill her by pouring petroleum on her on the previous day while she engaged in an official vaccination exercise. 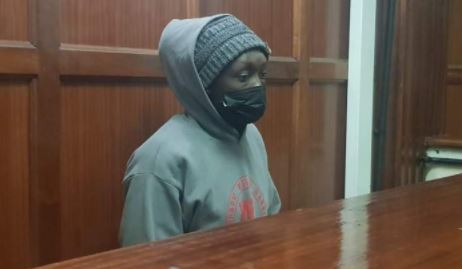 A woman identified as Sheila Andayi Okwomi has been arraigned in court for attempting to kill her husband's alleged sidechick by pouring petroleum substance on her.

"You are charged that on April 8, 2021 at about 12:00 pm at GK Kamiti Maximum Security prison in Kasarani sub county within Nairobi City County in the republic of Kenya attempted unlawfully to cause the death of Nancy Wanjiru Njeri by pouring petroleum substance on her at a close range,” the charge sheet read.

According to a police report seen by K24 Digital, the complainant who is attached to Kamiti maximum prison as a nutritionist reported at Kimiti Command Radio Studio that the accused threatened to kill her.

"She complained that she received threatening, abusive and defamatory messages through her mobile phone by Sheila Andayi,” part of the report read.

It is alleged that on April 9, 2021, the complainant made another report to Serious Crimes Unit office that the accused attempted to kill her by pouring petroleum on her on the previous day while she engaged in official vaccination exercise.

On April 8, 2021 at around 12:30 pm the accused was accompanied by her four-year-old child  and he sister who was carrying a manila bag with the substance in it. Upon approaching the complainant, she poured the liquid substance on her clothes forcing the complainant to cut short the vaccination exercise.

The complainant went to her house and changed then she carried with her the evidence (stained clothes) to DCI Kasara.

On April 14, 2021, the investigating team submitted the clothes to the government chemistry for forensic analysis to ascertain the nature of the substance. The results tested positive for petroleum.

The investigations concluded that the accused had a predetermined mind to harm the complainant on suspicion that her husband was having an affair with the complainant.

She pleaded not guilty and was released on a cash bail of Ksh600,000.