They said the university authorities had asked the affected students to pay another school fees for the session or risk missing exams which start next week. 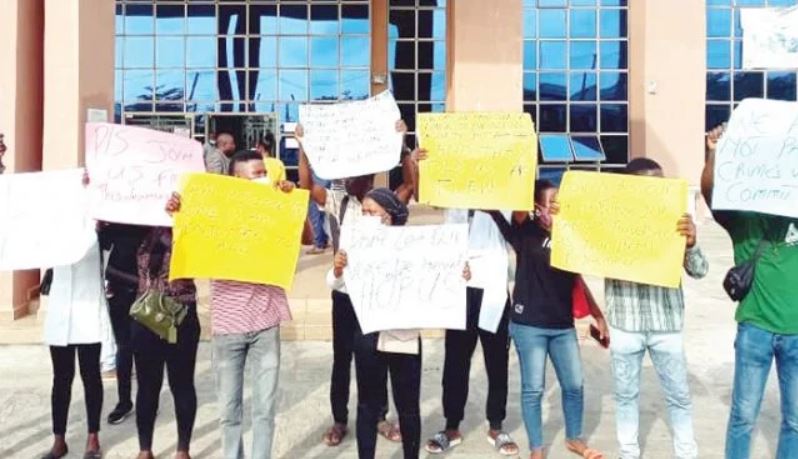 Some of the affected students

According to a report by The PUNCH, some students at the Ekiti State University have decried the alleged invalidation of their school fees for the 2018/2019 session by the institution following a malfunction of the school’s portal.

They said the university authorities had asked the affected students to pay another school fees for the session or risk missing exams which start next week.

Sunday PUNCH learnt that many students had problems paying their fees through the portal  in 2019 and met with aprogrammer working with the school.

The programmer  reportedly directed them to a cafe operator on the campus.

While some students allegedly paid their school fees in cash to Sunkanmi, others made transfers into his account after which he generated receipts for them from the portal.

Some weeks later, the portal was said to have crashed and after it was fixed, students were directed to embark on revalidation.

In the process, several students were shocked as they were told that the receipts issued to them were invalid.

One of the victims, who spoke to our correspondent on condition of anonymity for fear of being victimised, said over 500 students were affected. Of the number, Sunday PUNCH obtained the list of 113 students whose cumulative school fees ran into over N10m.

The affected female student said, “It all started in the year 2019 (2018/2019 session) when I had issues with my school portal, and I was on the verge of making school fee payment. Without access to the portal, I won’t be able to make any payment. I was referred to the ICT centre to lodge a complaint so that the portal issue could be rectified.

“A staff member of the institution, who was the portal programmer, rectified the issue, and he called the cafe operator to his office to make the payment. It was successful because a receipt was issued to me from my portal and it showed on my dashboard that I paid.

“I took the receipt to the bursar’s office to confirm my payment and it was confirmed successfully. During the first semester examination, a clearance card (exam permit) was given to me to proceed with my examination.

“Over 500 of us were unable to sit for some of our exams before we were issued temporary revalidation which led to a great number of us failing our exams or searching for our scripts. The school authorities are insisting we repay our tuition fees.”

Another student said the school official and the cafe operator were arrested and handed over to the Department of State Services in Ado Ekiti for proper investigation but were later released on bail.

He added, “Now (2020/2021 session), the school authorities are asking us to pay again. We held a peaceful demonstration against this act of injustice and met with the school deputy vice chancellor, chief security officer and the ASUU chairman. We have no money to pay, most of us have extra year just because of this issue. We really need help; this injustice is killing us.”

The students said they had written petitions to the Chairman, Academic Staff Union of Universities, EKSU branch, National Association of Nigerian Students, the state Commissioner of Police, twice and the Office of Ekiti State Special Assistant, Youths/Students Affairs but their efforts had yet to yield positive results.

“Exams will start next week and the school has made it known that whoever does not pay the school fees will not be allowed into the examination halls,” another student lamented.

When contacted on the issue, the spokesperson for the university, Mr Bode Olofinmuagun, said a committee had been set up to look into the case before the exams commenced.

He said, “On the issue of the portal that you mentioned, I think another committee was set up and they are working on it. The exams will start on December 13. Before then, all the issues will be resolved.”