The deceased included the father of a bride who wedded last Saturday, Joseph Dadi. Others are the driver of the vehicle, Gideon Ayuba and one other lady, Mary Goddy (31). 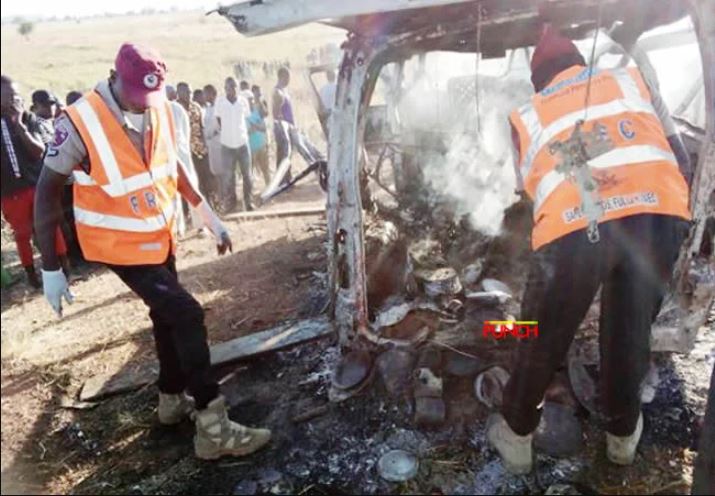 The PUNCH reports that the remains of three people who died in a crash while returning from a wedding in Jos have been laid to rest in Bauchi amidst tears.

The deceased included the father of a bride who wedded last Saturday, Joseph Dadi. Others are the driver of the vehicle, Gideon Ayuba and one other lady, Mary Goddy (31).

Dadi’s wife, Paulina, who was also involved in the crash, is said to be receiving treatment at the Abubakar Tafawa Balewa University Teaching Hospital, Bauchi.

The crash, which was said to be a lone crash, occurred less than 30 kilometres from Bauchi metropolis while they were returning to Bauchi from Jos, Plateau State where the wedding took place.

Dadi (62) a retired Personal Assistant to the Executive Secretary of Tertiary Education Trust Fund, was until his death, a Board Member, Bauchi State Christian Pilgrims Welfare Board.

Ayuba (39) until his death, was the personal driver to the Special Adviser on Legal Matters to Bauchi State governor, Barrister Kefas Magaji. While Goddy died as a staff of SEDO Microfinance Bank, Bauchi.

The funeral service for the three deceased was held on Wednesday at the Church of Christ in Nations, LCC, Millennium Quarters. While Dadi and Ayuba were buried at the Christian Cemetery, Yelwa Bauchi, Goddy was buried at Murai in Bogoro local government area of the state.

Speaking at the funeral service, the Special Adviser on Legal Matters to the Bauchi state governor, described the incident as tragic and devastating.

He said: “I feel devastated by these deaths because Joseph Dadi was my close friend for so many years while Gideon has been my staff for close to 19 years. God has called them and I’ve accepted what has happened in good faith.”