Mother Sells Her Months-old Twin To Buy Food In Afghanistan


Recall the Taliban take-over in August collapsed Afghanistan's economy and work dried up. 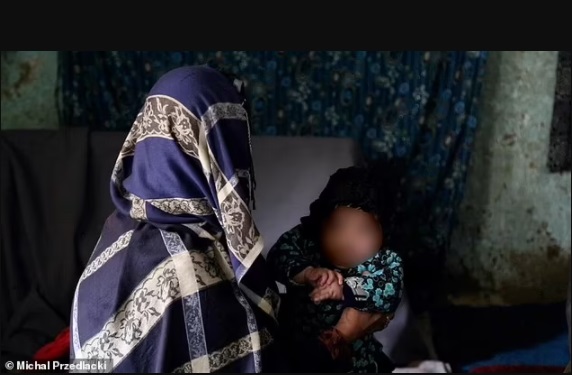 Following the takeover of Afghanistan by the Taliban, things have gone from bad to worse.
According to Dailymail, an Afghan mother has been forced to sell one of her newborn twins to get money to feed the other amid the country's rapidly worsening food crisis in Afghanistan.
The 40-year-old woman, from northern Jawzjan province, gave the baby to a childless couple in return for $104 which she hoped would buy enough food to last her family for another six months.
Recall the Taliban take-over in August collapsed Afghanistan's economy and work dried up.
The UN has warned that more than half of Afghanistan's population faces starvation this winter, a problem compounded by the fact that many aid agencies fled the country as the government collapsed and international aid dried up.
This family's plight was uncovered by Save the Children, which does still have workers on the ground who are distributing what food they have to those in need.
Speaking to the charity workers, the Afghan mother explained that she had given birth to the twins - a boy and a girl - around four or five months ago, shortly after leaving their farm due to drought.
The woman explained that she had initially planned to keep both children but was barely able to get hold of enough food for even one of them - typically bread, and sometimes milk powder.
Her husband, 45, works as a labourer but says there are only enough jobs for one day of work in five - and the day's wages, around $1, are enough for just two days of food.
The second-eldest son also works in the nearby market, the mother said, pushing carts that stall owners use to carry their produce.  But because he is young, owners often prefer to use stronger children and he frequently goes without work as well.
With the new babies crying continually from hunger, the woman says a childless couple approached her and offered $104 to take her newborn son away.
According to her, she initially refused, but after several days of seeing the boy cry with nothing to eat - she decided that giving him away was the best option to provide for him and for her remaining children.
She said: 'It was hard. Harder than you can imagine. I gave my child away because of destitution... I was unable to take care of him and I could not afford anything.
'I gave all of the money to my husband. He bought some rice, oil, and flour. We already finished them.'
Her husband added:  'We need help, we are hungry and poor.
'There are no work opportunities in Afghanistan. We have children. We need flour and oil the most, which we don’t have. It’s also good to have firewood.
'I could not afford to buy meat in the last two or three months. We only have bread for the children which is not always available.'
Top Stories