The truck driver was eventually arrested while his vehicle was burnt by angry youths who also vandalised about 10 trucks on the road. 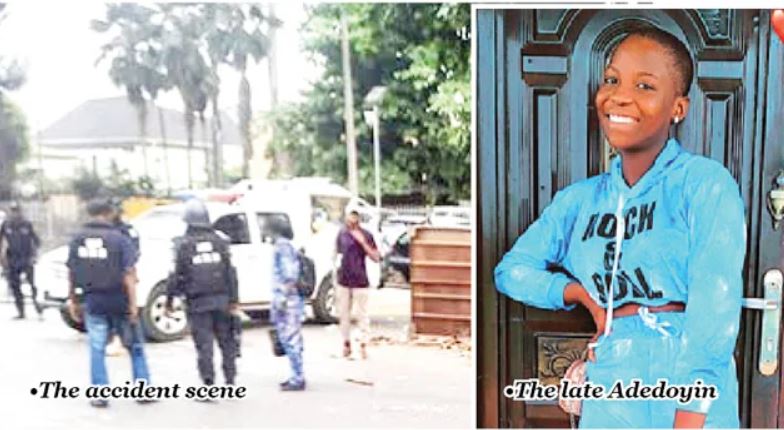 Bukola Adebayo, who was flanked by two women on whose shoulders she leaned, trudged to the family’s expansive living room from the bedroom.

She sank into a cushion with a Bible clutched to her chest, sitting close to her bereaved husband, Adeyemi Adebayo.

A team of the Lagos State Government officials led by the Commissioner for Education, Mrs Folashade Adefisayo, had visited the bereaved couple’s residence on Igbeyinadun Street, Sabo, on Wednesday morning to commiserate with them over the death of their only child, Adedoyin Adebayo.

Adedoyin, an SS2 pupil of Babs Fafunwa Millenium Secondary School (formerly known as Ojodu Grammar School) was going home around 2pm after closing from the school when a hit-and-run truck loaded with soap crushed her and about 14 other pupils.

The truck driver was eventually arrested while his vehicle was burnt by angry youths who also vandalised about 10 trucks on the road.

The police confirmed that two schoolchildren, 15-year-old Adedoyin, and a JSS 3 pupil, 14-year-old Israel Akpolebi, died, while others, who suffered varying degrees of injury, were admitted to different hospitals.

Speaking to City Round after the representatives of the state government left, 46-year-old Adeyemi explained that Adedoyin’s death destabilised him and his wife.

He said, “She was the apple of our eyes; she was our only child. Till now, her mother is still unstable. I am a cab driver. In the afternoon of that day, the vehicle was faulty and I called the owner to inform him. As I was driving home, I saw some of her schoolmates waving at me and shouting ‘Adedoyin.’ They said she was hit by a truck.

“I parked the car and took a bike to the scene. I saw personal effects of some pupils at the scene but didn’t see hers. We went to all the hospitals the pupils were taken to but couldn’t find her. My brother and a relative then went to the Lagos State Teaching Hospital, Ikeja. From there, they directed them to the Lagos Mainland Hospital morgue where her corpse was deposited.

“I was at the police station when the news of her death was broken to me. I nearly ran mad. It was policemen who held me and tried to console me. She was a very friendly child. She would hug her mum before she left for school. She was a good girl.

“The Commissioner for Education came and promised that the government would assist us in any way they could. This is the time my wife needs me most. If I have my own cab, I will be able to make more money to take care of her.”

Looking frail and devastated, 44-year-old Bukola betrayed emotion as she tried to speak on the incident.

Her elder sister, Mrs Victoria Lawal, blamed officials of the Lagos State Transport Management Authority for the crash, though the agency had in a statement denied complicity in the tragedy.

She described Adedoyin as a brilliant and loving child, lamenting the family just marked her 15th birthday two weeks ago.

She said, “We appeal to Governor Babajide Sanwo-Olu to prevail on LASTMA officials. If they had not chased the truck, the accident would have been avoided.

“Adedoyin was like a child to me. She was so precious to us. She spent the last mid-term break with me.

“She preached at the church last Sunday at the children section. She was also leading the Christmas Carole that would come up in a few days’ time. She was very brilliant. She clocked at 15 on November 26.

“A day before the incident, she was asking my daughter to give her a wig. When we learnt about her death on Tuesday, we were shocked. The government should find a way to console all the parents of the affected pupils.”

A neigbhour, Samsudeen Adekoya, said Adedoyin was fondly called ‘teacher’ because she usually assembled young children during the holiday and taught them.

He added, “We want the government to check the excesses of law enforcement agencies. The school gate leading to the highway should also be locked up. The school should provide another alternative entrance.

“We thank the state government officials for visiting the family but we urge them to fulfill all the promises they made.”

Our correspondent, who also visited the residence of Israel’s parents on Omolara Street, met sympathisers appealing to the pensive looking father, Denis Akpolebi, to take some pap.

Denis, an aluminium fittings installer, bemoaned bitterly as he shared memories of his late son, nicknamed Bob T, whose twin had died at birth.

He stated, “He was my third child. I was working at a construction site when I heard about the incident. I called his mum to go to the school. She called back to say she couldn’t find him. After a while, someone called and broke the sad news to me. He said my son was involved in the accident.

“His twin died at birth. We suffered a lot during his birth. His mum spent three months in the hospital because there were issues and I spent over N300,000. His last discussion with me was on a pair of shoes I promised to buy for him for Christmas. I could barely recognise him when I saw his corpse.”