Her condition deteriorated so much that she was sedated for an emergency C-section at 31 weeks, more than two months before her due date of October 15. 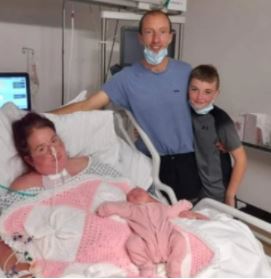 Laura Ward and her family
A woman who contracted COVID-19 has been given the shock of her life after waking from coma to discover that she has given birth.
She was in a coma for seven weeks after catching Covid.
Laura Ward, 33, contracted the virus while pregnant, gave birth to daughter, Hope.
Her condition deteriorated so much that she was sedated for an emergency C-section at 31 weeks, more than two months before her due date of October 15.
Thankfully all was well with baby, who was born weighing 3lb 7oz at Royal Bolton Hospital, and despite spending five weeks on the neonatal unit, she’s now healthy and has reached a much better weight.
Laura’s next memory was waking up seven weeks later, on September 30, to be greeted with the sight of the daughter she didn’t even know she had had.
"I opened my eyes to see Hope on the bed with me, but I couldn’t move any part of my body," says Laura, from Tyldesley, Wigan.
"All I could do was shake and nod my head."
Having had a tracheostomy and feeding tubes fitted, it was two weeks before Laura was even able to speak, and she has since had to learn how to do the most basic things all over again.
She said: "I tried really hard to lift my arms but I just couldn’t. It was frustrating because I couldn’t speak, but because I couldn’t move my arms or hands, I wasn’t able to write anything down that I wanted to say either.
"I had to learn to feed myself, brush my teeth, all the things you learn as a toddler, it’s like learning everything all over again."
The muscles in Laura’s legs had deteriorated while she was in a coma, and it was only at the beginning of December that she managed to walk again – first making her way down the hospital corridor with a frame, and then holding the hand of her three-year-old son William.
Laura will be finally allowed home today, Monday, December 13.
Her partner John Leece, 37, didn’t name their baby. He referred to her only as ‘baby girl’ until they could both agree on a name together.
The baby has now been named Hope.
Laura, who wasn't given the Coronavirus vaccine because she was pregnant,  says she would recommend the jab to any pregnant woman following her ordeal.
"I’d say just get it," she says. "I wouldn’t wish what’s happened to me on anyone and it’s better to be safe than sorry." 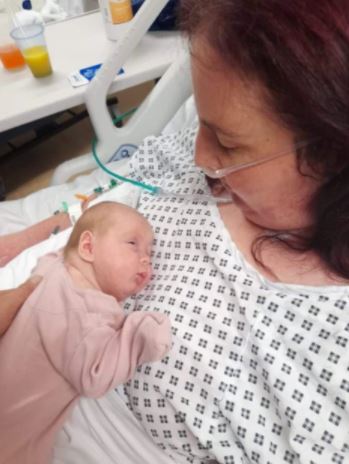