According to the senator, it is only the North East and the South East that are yet to produce president in the country. 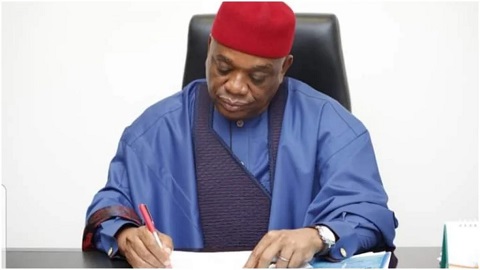 Orji Uzor Kalu
A former Abia State Governor and Chief Whip of the Senate, Orji Uzor Kalu has said that the All Progressives Congress is not owned by Bola Tinubu.
Recall that Kalu had on Tuesday said he would contest the All Progressives Congress(APC) Presidential ticket with Bola Tinubu, if the party zoned it to the South.
Tinubu on his part has met President Muhammadu Buhari to declare his intention.
However, during a programme on the Arise News Television on Thursday, Kalu said the time was ripe for the South-East to produce the next president of the country and that he had all it took to match the APC national leader.
He said, “I don’t own the party, neither does Bola Tinubu or any other person in the party. The party is owned by the Nigerian people and they are the only people; in a democratic set up, majority always have their way.
“Unless the party zone this thing (ticket) directly to us (South East), if we go by majority in our next convention, if it’s not properly settled and agreed upon, none of us will get it. This is why I said there is no need going to talk (with the president) that I want to contest or not until the APC National Convention Committee says this is going to South, probably South East.
“I cannot snub the president, he is the leader of the party. You cannot snub a man that sits at the right side of the chair. What I’m just trying to do is to be careful in informing him. If I go to tell him I want to run for president and the party does not zone it to South East, it will not be nice to myself.”
According to the senator, it is only the North East and the South East that are yet to produce president in the country.
Kalu also alleged that some persons “who want to be president” were bent on destroying him, stressing that there was jealousy in the Nigerian system.
Responding to a question on those pursuing him in apparent reference to his legal travails, the senator said, “They are Nigerians who want to be president, they are Nigerians who want to set me aside, they are Nigerians who just want to destroy me.”
Top Stories