The Governor Babajide Sanwo-Olu-led administration also rejected two of the 28 recommendations of the panel. 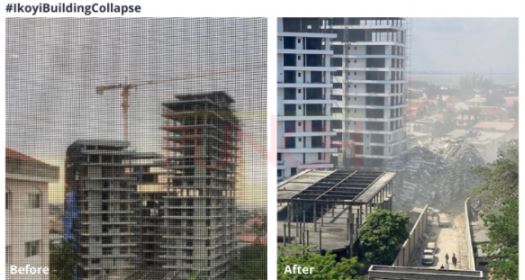 According to a report by The PUNCH, the Lagos State Government has accepted 26 recommendations of the Toyin Ayinde-led panel that investigated the collapse of a 21-storey building in the Ikoyi area of the state.

The Governor Babajide Sanwo-Olu-led administration also rejected two of the 28 recommendations of the panel.

In a White Paper exclusively seen by The PUNCH on Wednesday, the state government agreed with the recommendation of the panel that the existing two 15-storey buildings still standing at the site of the collapse on Gerrard Road in Ikoyi should be demolished and the land forfeited to the state government.

The state government also accepted the recommendation of the panel that the Developer of the collapsed property, Fourscore Heights Limited, be prosecuted because of the loss of lives at the rubble.

The PUNCH had earlier reported that the 21-storey building which was located on Gerrard Road in Ikoyi collapsed on November 1, 2021. Still standing beside the collapsed high-rise are two uncompleted 15-storey buildings.

About 44 persons were said to have died as a result of the incident, nine survivors were rescued from the rubble of the collapsed building, while some artisans working in the building before it collapsed are still missing.

Days after the ill-fated incident, while rescue operations were still ongoing, Governor Sanwo-Olu declared that he had set up a panel to investigate the collapse of the building.

On January 5, 2022, the Ayinde-led panel submitted its report to the governor at the Lagos House, Ikeja. The chairman of the panel (Ayinde) said the panel spent approximately six weeks on the assignment and submitted the report as well as electronic recordings of all the sections and videos of proceedings in a hard drive to the Lagos State Attorney-General, Moyosore Onigbanjo (SAN).

Ayinde said his panel visited the project site for a general assessment, coordinated the activities of the consultants who conducted tests on the site, received and reviewed documents from relevant ministries, departments and agencies and conducted 35 interviews.

He said the panel interrogated 91 persons, requested and received 21 memoranda and accessed the home of the late Chief Executive Officer of Fourscore Heights Limited, Olufemi Osibona, with a view to gathering useful documents.

Upon the receipt of the panel’s report Sanwo-Olu set up a four-man committee led by the Commissioner for Special Duties, Tayo Bamgbose-Martins, to produce a White Paper on the panel’s recommendation.

The Tribunal’s recommendations partly read, “The Developer, having been negligent, should forfeit the Project Site to the LASG in accordance with Section 25(4) of the Revised LABSCA Regulation 2019

“The Developer, Fourscore Heights Limited should be prosecuted because of the loss of lives involved.

“Based on Structural Diagnostics Survey Report, annexed as Schedule 2 to this Report, and in the interest of the safety of lives in the environment, the Tribunal recommends, that the existing 2 Nos. 15 storey buildings should be demolished using the controlled demolition technique in order to reduce the effect of the demolition on the surrounding buildings and avoid self and uncontrolled collapse. In addition, the Tribunal also recommends evacuation of all occupants within a 45m radius from the extreme boundaries of the blocks in the interest of public safety while arrangements are made for the controlled demolition.

“The various participants should face disciplinary action and prosecution as applicable.

“There would be need to take a serious decision on what to do to those who use their political weight to harass” and intimidate career civil servants who are merely discharging their statutory functions.”

In its comments, the state government agreed with all the recommendations stated above.

“Lagos State Government agrees with this recommendation and will forward to the Office of the Attorney General and Commissioner for Justice to institute appropriate charges against Fourscore Heights Limited.

“Lagos State Government agrees with this recommendation and will forward to the relevant Ministry, Department or Agency to take necessary steps provided by law to carry out the controlled demolition of the two remaining Blacks A and B in an effective and safe manner,” the White Paper partly read.

The state government also agreed that the various participants should face disciplinary action and prosecution as applicable. The government said the Attorney General of Lagos State will initiate the process of prosecution for all erring actors.

It, however, said the prosecution of the government officials that acted on the 2019 approval of the building will first be done by the Personnel Management Board. “The disciplinary process for civil servants has to first be done through Personnel Management Board in line with the Public Service Rules. The disciplinary process is to be set up immediately and concluded within fourteen (14) days,” the White Paper added.

Our correspondent learnt that culpable government officials including three town planners and civil servants will be prosecuted for lying under oath, and for using a private consulting company to create a fake approval that the building was good to go.

Other recommendations of the panel welcomed by the government include that the Lagos State Building Control Agency should be the only agency authorised to seal up buildings short of standards and that all other monitoring agencies should go through the LASBCA to seal any project in the state.

Others are that the regulatory authority should be well-staffed, material testing laboratory should be adequately funded and equipped, the National Building Code for Nigeria should be domesticated and that the individuals and companies found wanting in the building collapse should be referred to their professional bodies including the Council for the Regulation of Engineering in Nigeria.