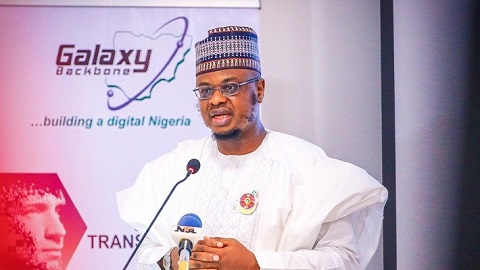 Pantami
The minister of communications and digital economy, Isa Ibrahim Pantami has broken his silence after his professorship was deemed illegal by the Academic Staff Union of Universities (ASUU).
Recall that he was appointed a professor of Cybersecurity by the Federal University of Technology, Oweri (FUTO), but ASUU kicked against it.
Mr Ibrahim, who spoke on Wednesday while addressing journalists shortly after the Federal Executive Council Meeting (FEC) which was chaired by Vice President Yemi Osinbajo, said he would refrain from publicly speaking on the issue because the matter is in court.
The minister had spoken extensively on a policy document approved by FEC which mandates government officials and agencies to mandatorily use official emails with the government’s domain name, but when asked about the ASUU’s position on his professorship award, he declined comment.
The minister said: “On your second question, no comment. No comment, and no comment. That is my position. I’m here for an official assignment that focuses on my responsibility. So anything to deal with my ministry of communications and digital economy, I can be subjected to you and that is why I come here. I couldn’t go anywhere.
“What is most important is that the institutions you have mentioned are in court. As a government official, do you know what contempt of court is? You need to know. So because of this, I’m a law-abiding citizen.”
In September, 2021, Mr Ibrahim was among seven academics who were elevated by the council of FUTO to the position of professorship at the council’s 186th meeting.
The university, in a statement, listed others to include Lawrence Ettu as a professor of civil engineering; Godfrey Emeghara as a professor of maritime management technology; Okechukwu Onyelucheya as a professor of chemical engineering; Alex Opara and Chikwendu Okereke as professors of geology, among others.
The development had attracted controversy among Nigerians, especially academics, who described the process leading to the appointment as “unprecedented and illegal.”
ASUU on Monday gave its verdict on the professorship awarded to Mr Ibrahim, describing the appointment as illegal.
At a media briefing held at the University of Lagos at the end of its two-day marathon meeting of the union’s National Executive Council (NEC), ASUU said the review of the processes that led to Mr Ibrahim’s appointment as a professor , were against the laid-down procedures within the university system.
The union’s president, Emmanuel Osodeke, said: “ASUU NEC rejects in its entirety the purported appointment of Dr Isah Ali Ibrahim Pantami as a professor of cybersecurity.
“From the evidence available to us, Dr Pantami was not qualified, and the said appointment violated established procedure for appointment of professors in the university.
“NEC directs all members and branches of our union throughout the Nigerian federation not to recognize, accord or treat Dr Isah All Ibrahim Pantami as a professor of cybersecurity under any quise NEC.”
ASUU said the latest decision was a follow-up to an earlier decision taken in 2021 when it set up a committee to visit the university to investigate the circumstances leading to the appointment.
Meanwhile, ASUU said it will sanction all its members who may have taken part in the processes, saying such will serve as deterrence to others.
“NFC also resolved to sanction all ASUU members who participated in the process that led to the illegal appointment in accordance with the established procedures of our union,” ASUU said.
Top Stories