Buhari is sued along with the Attorney General of the Federation, AGF, and Minister of Justice, Senate President, Speaker and others. 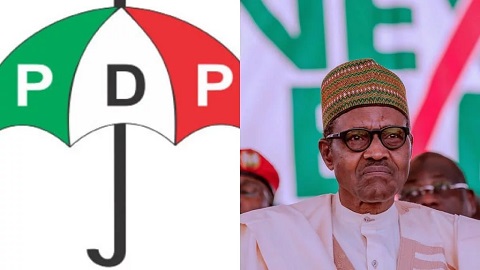 President Muhammadu Buhari's plan to tamper with the newly amended Electoral Act signed into law some days ago has been rejected by the main opposition party, the Peoples Democratic Party.
PDP dragged President Muhammadu Buhari before a Federal High Court in Abuja, saying such a move is unlawful.
Buhari is sued along with the Attorney General of the Federation, AGF, and Minister of Justice, Senate President, Speaker, House of Representatives, Clerk of the National Assembly, Senate Leader, House of Representatives Leader and the Independent National Electoral Commission, INEC.
Also joined as defendants in the suit marked FHC/ABJ/CS/247/2022 are Deputy Senate President, Deputy Speaker, House of Representatives, Deputy Senate Leader and Deputy House of Representatives Leader.
The main opposition party in the suit filed on its behalf by Chief James Ogwu Onoja, SAN, is praying the Federal High Court for an order of interim injunction restraining Buhari and other defendants from refusing to implement the duly signed Electoral Act or in any manner withholding the Electoral Act from being put to use, including the provisions of section 84 (12) of the said Act pending the resolution of the suit.
The PDP also applied for an order of the court stopping the National Assembly from giving effect to President Buhari’s request to remove section 84 (12) from the Electoral Act or take any step that will make the provision inoperative pending the resolution of the motion on notice for interlocutory injunction.
The grouse of the PDP is that President Muhammadu Buhari having assented to the Bill on February 25, 2022, cannot give any directive to the National Assembly to take immediate steps to remove the section or any section of the Act on any ground whatsoever.
Top Stories