Bello is currently presiding over a meeting of the APC Caretaker/Extraordinary Convention Planning Committee and State chairmen of the party. 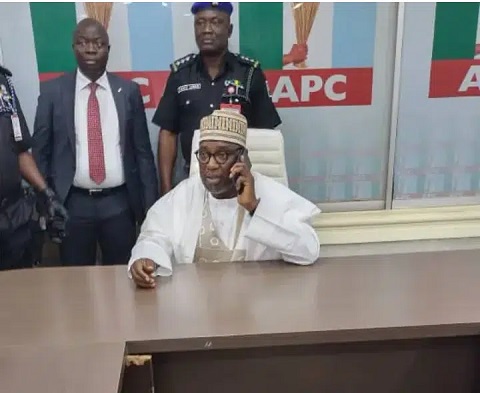 Governor Mai Mala Buni of Yobe State has been removed from his position as chairman of All Progressives Congress Caretaker/Extraordinary Convention Planning Committee, according to a report by DailyTrust.
Governor Sani Bello of Niger State today took control of the party.
Before this time, Buni had been in charge of the ruling party’s caretaker committee in the last two years.
Bello is currently presiding over a meeting of the APC Caretaker/Extraordinary Convention Planning Committee and State chairmen of the party.
In an interview with newsmen at the end of a meeting with the Caretaker Committee and another with states chairmen, Bello, who sat on Buni’s former seat, said, “The states chairmen, took their oath of office today.
“We discussed progress made so far on convention and what needs to be done next so that we will achieve the March 26 date for the convention.”
Responding to a question on why he presided over the meetings, the governor said, “Acting Chairman; I have been acting for a while since the chairman (Buni) travelled.”
When asked to confirm Buni’s sack and his appointment as the new chairman of the Caretaker Committee, Bello said, “No comment.”
Our correspondent reports that the development looks strange as Secretary of the APC Caretaker Committee, Senator John James Akpanudoedehe, is always in charge of all functions at the party’s national secretary and not the Niger State governor.
Niger gov’s vice presidential ambition triggering crisis in APC – Ex-Spokesman
A member of the National Executive Committee (NEC) and former Deputy National Publicity Secretary of the ruling All Progressives Congress (APC), Yekini Nabena, has asked Niger State governor, Sani Bello to shelve his alleged plan to summon NEC meeting.
Nabena in a statement said Bello’s vice presidential ambition is trigering crisis and anarchy in the party.
He argued that Bello is just a member of the APC Caretaker/Extraordinary Convention Planning Committee and does not have the legal power to singlehandedly convene NEC meeting.
“Governor Bello should not destroy the ruling APC because of his personal political ambition of becoming Vice President or whatever in 2023. The likes of Govermor Bello are the political vultures working against our party and to cause anarchy in the ruling APC.
“I am using this medium to call on our leaders across the states to caution governor Sani Bello of Niger State. The presidency should also call him to order to immediately drop the plan to convey a NEC meeting without the knowledge of Governor Mai Mala Buni and the Secretary of the CECPC.
“Governor Sani Bello is neither the Chairman nor Secretary of the National Caretaker Committee. So where does he get the power to convene such meeting?” he queried.
Top Stories