Troops look for Ukrainian ammunition to use so they can go to hospital without it looking like a self-inflicted wound, local media claims. 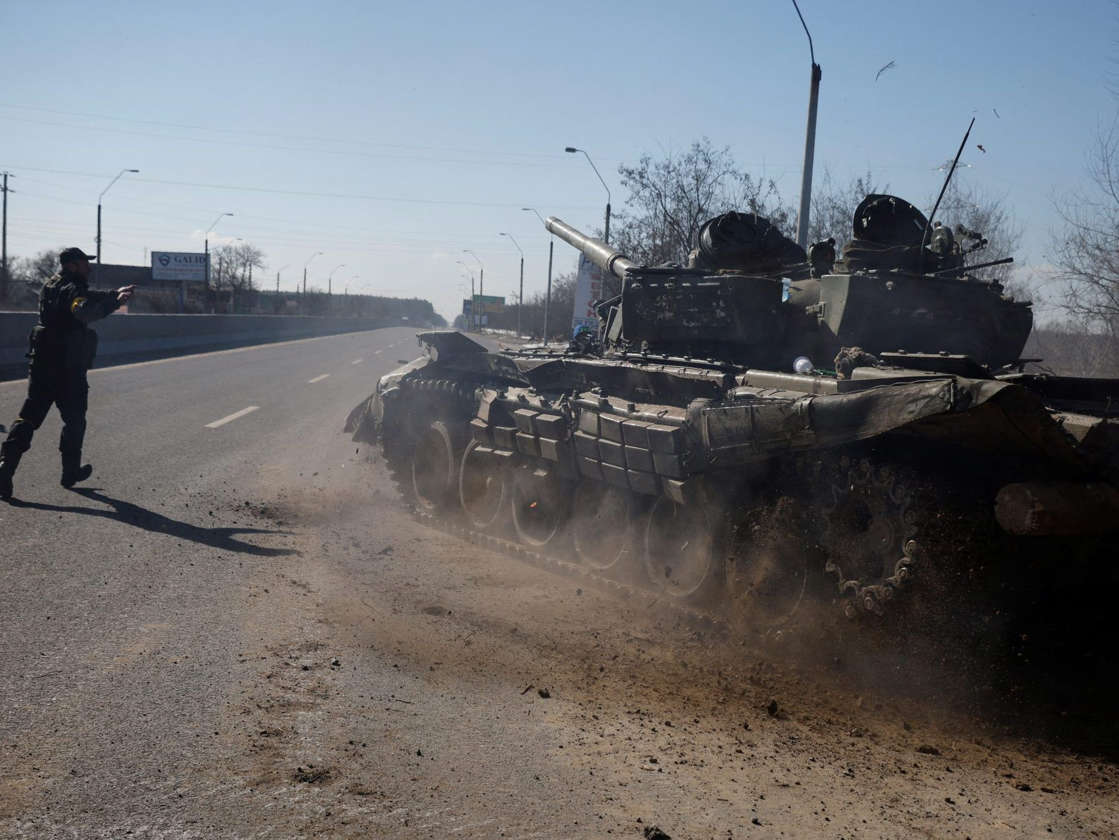 Russian soldiers are taking shocking measures to avoid fighiting in Ukraine.
According to Belarusian media source NEXTA, Russian soldiers are shooting themselves in the legs to avoid fighting in Ukraine.
Troops look for Ukrainian ammunition to use so they can go to hospital without it looking like a self-inflicted wound, local media claims.
It follows a collapse in morale among Putin’s forces after they were forced to kill peaceful civilians, Scottish Sun reports.
In one conversation between soldiers intercepted by Belarusian media source NEXTA, a Russian said: "They've been shooting at us for 14 days. We're scared.
We're stealing food, breaking into houses. We're killing civilians.
"Russian officers shoot themselves in the legs to go home. There are corpses everywhere."
Another said troops are "looking for Ukrainian ammunition in order to shoot themselves in the legs and go to hospital".
It is thought harsh punishments will be dished out to soldiers who desert the field when they return to Russia.
It comes after furious soldiers warned they will rise up against Vladimir Putin.
His troops branded one particular airstrike on a maternity hospital "the most perverse f***ing form of neo-Nazism".
And soldiers have since warned their warmongering leader he "won't hide this for long", adding "we all will be judged".
One reconnaissance officer, Vladimir, told an international media briefing this week: "I want to tell our commander-in-chief to stop terror acts in Ukraine because when we come back we'll rise against him."
Another officer at the same event told Putin: "You won't hide this for long. There are many like us here. Sooner or later, we'll come home."
One Russian fighter pilot, Maxim, became emotional while speaking about the suffering civilians have had to endure since his country's invasion.
He told CNN: "I don't know, what can justify, f***, the tears of a child, or even worse, the deaths of innocent people, children."
The soldiers laid the blame at the feet of Russian commanders for "horrifying" crimes against "peaceful Ukrainian civilians" - and warned, "you cannot forgive such things".
CNN reported another soldier saying: "Russian President Vladimir Putin has given orders to commit crimes.
"It's not just to demilitarize Ukraine or defeat the Armed Forces of Ukraine, but now cities of peaceful civilians are being destroyed.
"The crimes that we committed; we all will be judged."
And baby-faced Russian soldiers last week said they were sent to die like meat and blasted Putin as a criminal.
The captured troops said they were deceived by their leader, adding: "We want to stop, we want to tell the truth to the whole world.
"Children are dying for nothing. Putin is a liar.
"I want to go home, I don’t want to be here, I am ashamed, forgive me," one soldier told a packed press conference.
The men said they were nothing but cannon fodder for Russian generals who were sending inexperienced, conscripted troops to their early deaths.
"We are meat, we are being killed by aircraft and artillery bombing peaceful cities," one soldier said.
"Comrade president of Russia, you are lying - at your whim you commit such crimes here.
"Putin... you are wrong, you are guilty. I ask to end all of this. Please give the order to all servicemen to return home."
Top Stories