The Director, Lagos State Fire and Rescue Services, Margaret Adeseye, in a statement on Wednesday, said the intensity of the fire affected the bridge, adding that movement on the corridor was truncated. 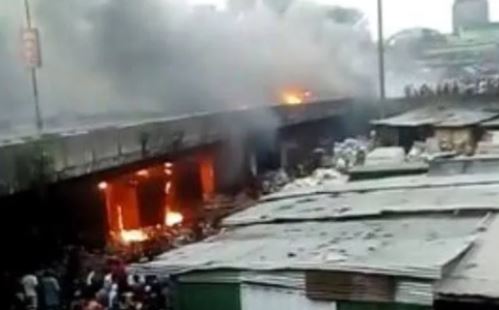 The Lagos Eko bridge has been shut down by the government following the fire outbreak in Apongbon area of the state.

The fire which started around 3am on Wednesday March 23, damaged the bridge and also destroyed properties and goods worth millions of naira.

The Director, Lagos State Fire and Rescue Services, Margaret Adeseye, in a statement on Wednesday, said the intensity of the fire affected the bridge, adding that movement on the corridor was truncated.

“The fire, which was reported around 3.14am on Wednesday under the Eko Bridge at Apongbon, where various stocks in trade are plied, was met by the first set of crews of the agency on arrival.

“The nature of the fire was disastrous; there has been no reported case of injury or death.”

Osanyitolu also said a post-disaster assessment revealed the need for a thorough review of the location, including integrity tests of the bridge.

“This will be carried out with all stakeholders, including the Federal Ministry for Works, Lagos State Ministries of Works, Special Duties and the Environment; Lagos Fire Service, Federal Fire Service, National Emergency Management Agency and others.

“The occupants of the illegal structures have been issued a notice of 48 hours to remove same from the location to prevent any secondary incident.”

The Lagos government has now announced that bridge will remain closed pending the conclusion of the integrity test.

“TRAVEL ALERT: Eko Bridge has been shut indefinitely by the Lagos State Government due to a fire outbreak at Apongbon in the early hours of today.

“Bridge likely to remain closed until an integrity test is conducted. All are advised to factor development into their travel plans and consider security/safety in the selection of alternative routes.”

Alternative routes include the Ijora/Apapa area, the Leventis/UBA roundabout to connect Marina area, or the Ebute Ero axis to link Inner Marina and Third Mainland Bridge.