40 cartons of Co-Codamol, a brand of paracetamol with Codeine, which is classified as Opioid, were seized from a freight agent. 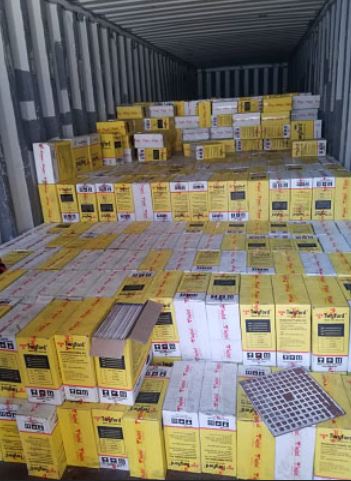 Over 1.9 million tablets of Tramadol and Codeine imported into the country from the United Kingdom and Pakistan have been intercepted by the National Drug Enforcement Agency (NDLEA) at the Murtala Muhammed International Airport (MMIA), Ikeja, Lagos.

NDLEA spokesman Femi Babafemi said in a statement yesterday that 40 cartons of Co-Codamol, a brand of paracetamol with Codeine, which is classified as Opioid, were seized from a freight agent, Eraikhueme Ehis.

Babafemi said 349,800 tablets of the drug weighing 336kg came in from London as a consolidated cargo through the SAHCO Import Shed of the airport.

He said the cargo was declared as personal effects but was discovered to contain some medicaments.

Also, he said, no less than 1,584,000 tablets of Tramadol were recovered on March 15 by NDLEA operatives in collaboration with Aviation Security (AVSEC) and Customs personnel at the airport.

The spokesman said the seizure included 17 cartons of 250mg Tramadol branded as “Tamra” weighing 669.70kg, and five cartons of 225mg Tramadol under the brand name “Royal” with a gross weight of 217.15kg.

Babafemi also said the Agency arrested one Oyewunmi Ademola Ahmed, a 50-year-old, who is allegedly one of the kingpins behind the attempt to smuggle 11.93kg of Cocaine to Accra, Ghana through the Seme land border, Lagos.