The suspect was arraigned on three counts bordering on murder and demanding a ransom. 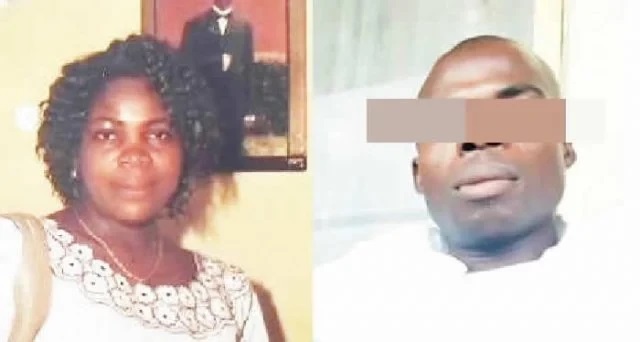 A man of God, Salem Chigozirim alleged to have strangled two women has been arraigned in court.
Chigozirim is the pastor with The Apostolic Church, Umuahia.
He has been arraigned before a High Court sitting at Umuahia, Abia State, for allegedly strangling a 45-year-old housewife, Virginia Ndife, and another lady, Chioma Nwoke.
Punch reports that the suspect was arraigned on three counts bordering on murder and demanding a ransom.
According to police report, Chigozirim was said to have strangled Virginia on September 21, 2021. The deceased’s husband, Mr Christian Ndife, said his wife on the day of the incident went to their new house on 67, Agulu Street, Umuahia, to do some work with the suspect, who was also a plumber. Christian said he was at their family house when his daughter informed him that his wife had been killed.
“I rushed to the house, only to see the lifeless body of my wife. I reported to the police and the DSS. After two weeks, the DSS captured the suspect.
I saw that my wife was strangled with a blue bathing sponge in the neck; the entire room was scattered. The defendant wrote something on a sheet and placed on the ground that he was looking for some documents and when he called my wife, she told him to do his worst.
He said he had done some plumbing services for my wife and also sent same message to my brother-in-law, Anthony Okeke, that he was looking for his keke documents.”husband of deceased said
Chigozirim, during interrogation by the DSS, was said to have also confessed to the earlier killing of Chioma in August 2021.
The victim’s mother, Mrs Clementina Nwoke, a member of Chigozirim’s church, said she was called on August 20, 2021, that her daughter, who lived in Owerri, Imo State, had not been seen for one week.
“I started looking for her through the DSS in Umuahia and Owerri. I later got a message from my daughter’s phone that I should pay N1.5m. The DSS asked me to offer N50,000; I offered N100,000. Using my daughter’s phone, he (suspect) called me to come to Mbgoko Amiri in Obingwa LGA.
On reaching there, a voice directed me to where to place the money. Though I was not seeing the person, I dropped the money at the foot of the pole I was directed to.
I asked him about my daughter and he said after dropping the money, I would see her at Umuikea Junction. This was on September 7, 2021. When I got to Umuikea Junction, I did not see my daughter.
Towards the end of September, the DSS asked me to show them the picture of Chioma and later invited me to Umuahia, where I met two of my pastors, and all of us went to our apostle at the World Bank Estate, Umuahia.”the distraught mother said
She said some of the church leaders later broke the news to her that Chioma’s decomposing corpse was found at Mbano, Imo State. Mrs Nwoke said her daughter was strangled with a head tie and “left upside down at the foot of a tree.”
She stated that when the suspect was arrested over Virginia’s murder and his house was searched, he was caught with Chioma’s phone and ATM card, adding that he withdrew a lot of money from her daughter's bank account.
The case was adjourned till May 24, 2022.
Top Stories