A Nigerian doctor has threatened to expose some hospitals whom he accused of injecting women and lying to them that they are pregnant.

@the_beardedsina who further revealed that these women are told that they have cryptic pregnancy, added that the women will keep believing because they have pregnancy symptoms, not knowing they are being pumped with pregnancy hormone injections.

He also disclosed that these hospitals take money from these women and end up giving their victims an "arranged baby". The Nigerian doctor also threatened to expose one of the hospitals.

The woman will do scan even after first trimester, there won't be baby in her womb & they will keep telling her she is pregnant and the woman will keep believing because she has pregnancy symptoms, not knowing she is being pumped with pregnancy hormone injections Dropping soon

And they collect a lot of money from these women, they pay heavily for these so called Cryptic pregnancies they even give drugs for the woman to vomit so she feels yes she is pregnant Word has it that some of them even work hand in hand in with baby factories and stolen babies.'' 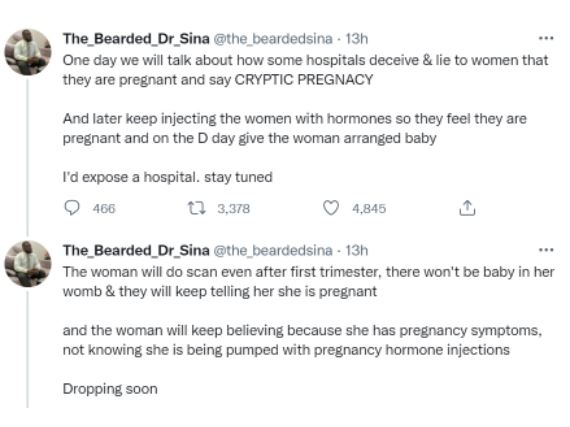 Nail Technicians And Hairdressers Gossip The Most In Nigeria - Davido