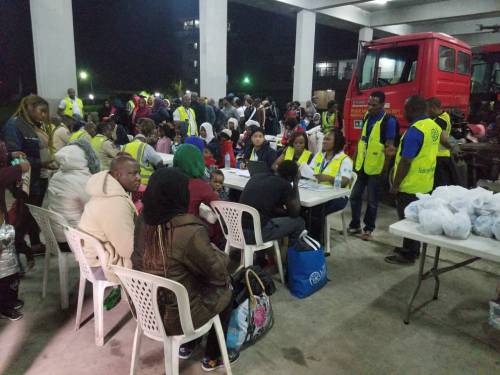 According to a report by SaharaReporters, the National Emergency Management Agency NEMA, has received a batch of 158 stranded Nigerians from Libya.

This brought the figure to 61 females and 97 males out of which four arrived with various degrees of health challenges.

One out of the females had serious burns; two others had serious mental health issues while the only young man among them suffered fractured leg.

The returnees who arrived aboard Al Buraq Air Boeing 737 – 800 with Registration number 5A-DMG at 1715 hours at the Cargo Wing of the Murtala Muhammed International Airport, Ikeja, Lagos State, were received on arrival at the Tarmac by the officials of NEMA, International Organisation for Migration IOM, Nigeria Immigration Service, National Commission for Refugees, Migration and Internally displaced Persons and other relevant agencies.

The Director General of NEMA, Alhaji Mustapha Ahmed who was represented by the NEMA Lagos Territorial Office Coordinator, Ibrahim Farinloye, assured the returnees that the Federal Government would not relent to make the youths have level playing grounds where they could achieve their potentials in whatever fields they choose.

He admonished them to shun vices as the country can only thrive in a peaceful and serene atmosphere when they give in their best.