Unable to stomach the pain of the young lady leaving him, it was learnt that Chigozie had quietly nursed a revenge agenda for several months before striking. 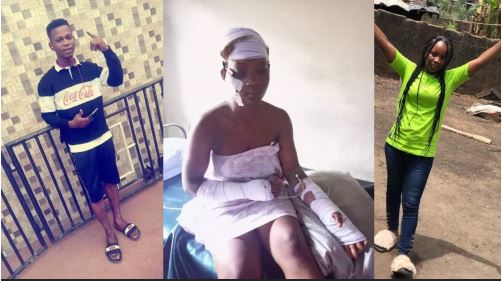 According to a report by SaharaReporters, a young woman is currently battling for her life at a hospital in the Rumuodara area of Port Harcourt, Rivers State, after an alleged brutal attack by her ex-lover with a machete.

The victim named Onyekachi Chinomso and her attacker, Ifeanyi Chigozie, who is now on the run, dated for several years and even had a child together before the relationship went sour and both went their separate ways.

Unable to stomach the pain of the young lady leaving him, it was learnt that Chigozie had quietly nursed a revenge agenda for several months before striking.

On March 20, 2022, he craftily found his way to Chinomso's family house in Port Harcourt to hatch his evil plot after learning that she had presented another man to her people as the person she wanted to get married to.

Armed with a machete, Chigozie allegedly sneaked into the apartment of his victim without the knowledge of anyone around the place.

By the time he unleashed his 'venom' on the 20-year-old lady, she was left between life and death following several machete cuts to different parts of her body.

More than one month since that gruesome attack on her, Chinomso's chances of recovery remain slim.

Narrating events that led to the attack on his sister, Chinasa, brother of the victim told SaharaReporters that the entire incident was a plot carefully hatched together by Chigozie and others yet to be identified for a long time before March 20 when he delivered the killer blow.

According to him, more insights into the evil plot and the persons behind it will be revealed once the attacker was apprehended by law enforcement agents.

The matter was reported at Okporo Police State in the state capital but no arrest has been made yet.

He said, "My sister disclosed that it had been long she saw the guy, adding that she had nothing to do with him again.

"He pretended and lied to people that he gave my sister clothes to sew for him and that he had come to collect them.

"On the day the incident happened, she stepped out to buy groundnut to drink garri but when she came back and opened her door and went inside the room, Chigozie rained several machete cuts all over her body. Before she managed to call for help, the guy had escaped from the room.

"She lost a finger and sustained deep cuts all over her body. She has been in the hospital since that period while the attacker is nowhere to be found."

Speaking further, Chinasa disclosed that the familyhad spent a lot of money on ensuring that his sister received appropriate medical care.

According to him, shortage of funds had prevented doctors from performing necessary surgeries on the young lady and increase her chances of survival and full recovery.

"She requires some urgent surgeries to help her stand a good chance of speedy recovery.

"We are still looking for the money for the surgeries.

"The guy who attacked her is from Akarkwo Amamba in the Uzuakoli area of Abia State. He has been on the run since the incident. We hope that he is arrested soon to face the consequences of his actions."

The spokesperson for the police in Rivers State, Grace Irenge-Koko, when contacted by SaharaReporters over the incident, said she had yet to be briefed, adding that she was awaiting a detailed report into the matter.