They were buried yesterday in Abaezi forest in Abacheke Kpofire community of Ohaji Egbema council in the state. 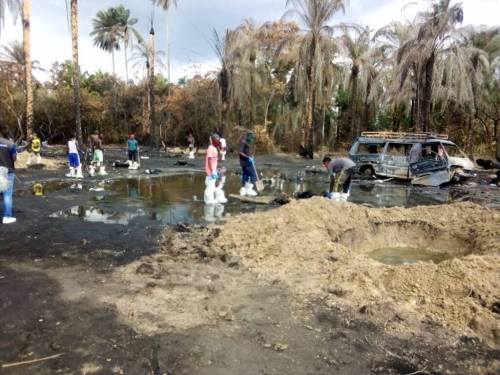 As many as fifty bodies of victims of Friday’s illegal refinery explosion in Imo State have been buried in mass graves, SaharaReporters reports.

They were buried yesterday in Abaezi forest in Abacheke Kpofire community of Ohaji Egbema council in the state.

Speaking at the grave site, chairman of the council, Marcel Amadioha, said only 50 victims who could not be identified were given mass burial.

The exercise was witnessed by security agents and officials of the National Emergency Management Agency (NEMA).

Over 130 people died in the blast, some reports claimed. The victims were buried, at about 5pm, in three graves dug by locals.

Journalists and security agents waited for more than six hours for the arrival of health officials who were expected to fumigate the area after the bodies were collected from various spots where the fire caught them as they fled from the raging inferno.

A youth leader, Ben Marcus, said some of the victims were identified by their relatives and allowed to carry them for burial.

He urged the government to provide employment for the teeming youths of the community to dissuade them from getting involved in such illegal and risky business.