Frances Connolly, a former social worker and teacher has set up two charitable foundations since her and her husband, Paddy won the huge prize in 2019 New Year’s Day draw. 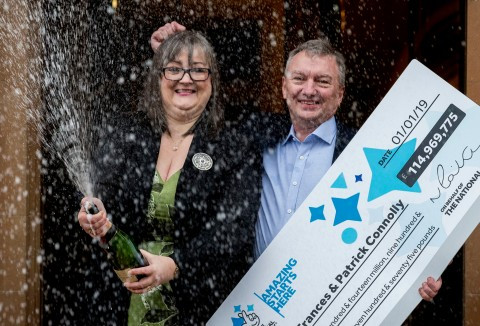 A woman has given away more than half of the £115million over (N59 billion) lottery she won because she's addicted to helping others.
Frances Connolly, a former social worker and teacher has set up two charitable foundations since her and her husband, Paddy won the huge prize in 2019 New Year’s Day draw.
One of the charities is named after her late mother Kathleen Graham in their native Northern Ireland, and works to improve the lives of all communities in Strabane and Belfast.
She says her husband, Paddy had persuaded her to agree on a budget to give to charity in order help keep her habit of giving money in check.
But she has already blown that by giving away the amount of money they would have donated to charity by 2032 if they had followed the budget.
Frances, 55, from Hartlepool, County Durham, has handed about £11million to charity in 2022 alone roughly what she’d agreed to donate over the course of 10 years.
According to her, she gets a real ‘buzz’ from being able to change people’s lives for the better with her money, adding: ‘I’m addicted to it now.’
When the couple first hit the jackpot, they gave away large chunks of cash to friends and family, using a list Frances prepared in anticipation that she’d someday win.
Frances estimates she has given away £60million, including to charity.
‘I’ve got 17 nieces and nephews, so they all had to get a bit,’ she added.
Frances said helping others, whether with money or by volunteering her time, lifted people’s spirits during lockdown.
The couple, who have three daughters – Catrina, 34, and twins Fiona and Natalie, 26 are not extravagant with their wealth when it comes to spending on themselves.
Their biggest expenditure after their win was a six-bedroom house in County Durham with seven acres of land.
Her husband, Paddy drives a second-hand Aston Martin, but she scoffed at the idea of spending £13,000 on a console table.
Advicing other lottery winners, she said;
‘Think about what type of person you are and what type of person you want to be’
Asked why she was happy to give so much away, Frances said: ‘Oh, who needs all that money?
‘I’m not being funny, I’d have been a millionaire anyway if I took back all the money I’ve given away over the years.
‘People do ask, “How did you cope with that amount of money?” I said, “I never did. It wasn’t in the bank two days”.
She added: ‘It’s still weird, but I’ve never actually had to come to terms with all that money because we had it for such a short amount of time.’
She adds that money can't alter your personality.
‘If you’re stupid before you get it, you’re going to be stupid afterwards.

‘Money’s not going to make you sensible. Money liberates you to be the person that you want to be.