The students maintained that the incumbent President Muhammadu Buhari “has degraded the office of the president so much” that the likes of Ngige and Nwajiuba could put themselves forward for the exalted office. 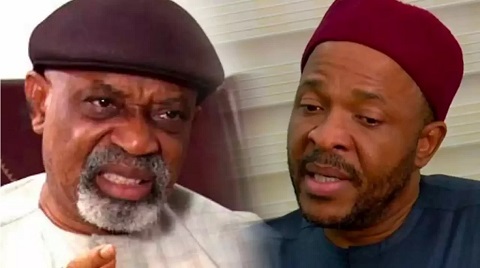 National Association of Nigerian Students (NANS) has called on President Muhammadu Buhari to sack two of his ministers immediately.
NANS said the Minister of Labour and Employment, Chris Ngige and the Minister of State for Education, Chukwuemeka Nwajiuba are not credible individuals and should resign instead of aspiring to be president.
NANS expressed concern that “individuals who do not have any credible past or present can now come out to declare their aspiration for the office of the president without shame,” under the All Progressives Congress (APC).
The students maintained that the incumbent President Muhammadu Buhari “has degraded the office of the president so much” that the likes of Ngige and Nwajiuba could put themselves forward for the exalted office.
“Many of such disappointment is the embarrassing declaration of intention and purchase of interest form by the duo of the Minister for Labour and the Minister of State for Education, Mr Chris Ngige and Mr Chukwuemeka Nwajiuba respectively,” they said in a statement signed by the Ogun State Chairman of NANS, Damilola Simeon said on Thursday.
The students stressed that the duo of Ngige and Nwajiuba have “failed to resolve the lingering ASUU strike among many other issues confronting the ministries they both head.”
Simeon said, “By norms, failures like Mr Nwajiuba and Ngige should resign from their positions and tender open apology to Nigerian students and their parents for failing to resolve the crisis in the education sector.
“Unfortunately, they have raised their shamelessness by showing intention to run for the most serious office of the federation.
“Should Buhari be responsive and sensitive to national concerns, both men ought to be greeted with letters of dismissal as Ministers not later than 24 hours after their official declaration. Or what hope lies in a man who has failed in handling just a single ministry aspiring to be the President?”
In the same vein, NANS described as heartbreaking, the fact that the APC dignified “these failed Ministers with access to purchase nomination form of the party,” saying “this is a proof that the party leadership emphasises income generated from sales of form above national interest.”
The statement added: “This goes with the unbelievable fact that the form is sold for 100 million Naira in a country where over seventy percent of her citizens survive below a dollar per day; and a ruling party that has failed in addressing this poverty rate is mocking her citizens through this.
“Our concern is also that these individuals purchasing the interest form of the APC and their counterparts in PDP for as much as N100 million and N40 million, respectively, lack conscience. We believe no individual with legitimate income and good intention would purchase the form to aspire for a presidential job of less than N60 million salary in four years at such amount.
“This is an open mockery of the Buhari anti-corruption crusade facade. Even at this, it is ridiculous that someone like Governor Yahaya Bello and Nyesom Wike of Kogi and River States, who are owing salaries and/or pension could boldly purchase form. This exposes how badly our polity has been brought to its lowest ebb.
“In conclusion, as much as we respect the power of parties to determine their internal affairs, as well as political rights of individuals, it is important that we make our concerns known in the interest of our dear country.”
Top Stories