A report issued then by the chief government pathologist indicated that the cause of death was blunt force trauma, giving inference that the child died due to injuries consistent with a case of child abuse. 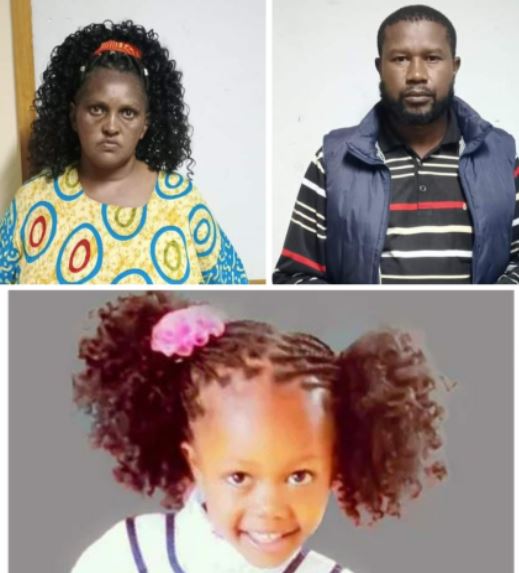 The murder of 6-year-old girl, Beverly Mumo Musyoki, who was murdered by her father Robinson Musyoki and stepmother Rose Muteti, on August, 24, 2020 in Kenya has been unravelled by homicide detectives.

The minor who was at the centre of a protracted battle between her estranged parents, suddenly died on August 24, 2020, while living with her father in Mlolongo, Machakos County.

In a report filed at Mlolongo police station, the girl had complained of chest pains and was declared dead on arrival at Mater Hospital in Nairobi.

An autopsy done later by four doctors, including government pathologist, Johansen Oduor, revealed that she died of traumatic injuries.

The Directorate of Criminal Investigations, DCI, in a statement on Monday, May 9, 2022, said after conducting fresh investigations into the murder, which had earlier been dismissed as the ''work of powers of darkness,'' the homicide experts opened a fresh can of worms linking the two to the murder and arrested the them on Sunday, at Emali, in Makueni county.

"According to Beverly’s biological mother Naomi Kiamba, she learnt of the death of her daughter through a phone call from her ex-husband, who called her on October, 24, 2020 and informed her that he was headed to Montezuma funeral home, since their daughter had fallen sick and died," the statement read.

"Naomi rushed to the funeral home only to be confronted by the lifeless body of her daughter bearing bruises all over the body.

"A report issued then by the chief government pathologist Dr Johansen Oduor, indicated that the cause of death was blunt force trauma, giving inference that the child died due to injuries consistent to a case of child abuse.

"Investigations by the homicide detectives indicate that following the bitter separation of Beverly’s parents, a children’s court had directed that Robinson stays with the children for one month from October 29, 2019 to December 5, 2020 before returning them to their mother.

"That was the last time Naomi saw her daughter alive, since her ex husband an engineer at the Kenya Pipeline, never returned the children and stopped picking her calls. Unknown to her, Robinson had married another woman and moved in with her in an unknown location

"Naomi went back to court on December, 16, 2019 and obtained a warrant of arrest against Robinson which was served to the OCS Industrial Area police station. Robinson was nowhere to be found until almost a year later, when he called Naomi with the devastating news of their daughter’s demise.

"Prior to their separation, the couple lived happily and were devout Christians. Naomi’s husband played the guitar at the African Brotherhood Church in starehe while she sang in the choir. But all of a sudden, Naomi started noticing weird behavior from the husband. He started drinking alcohol yet he was a teetotaler and would conduct rituals using animal blood. This pushed Naomi to depression leading to the collapse of their marriage

"The detectives have also established that the deceased’s 11-year-old brother who is a key witness in this case had received threats to his life, if he revealed what had transpired prior to his sister’s death

"The fresh investigations into this case follows the elevation of the Homicide unit to a fully fledged department within the Directorate of Criminal Investigations by the Director General George Kinoti, and the confirmation of Mr Martin Nyuguto, HSC, as the director.

The two suspects are currently at the Machakos High court facing murder charges,'' the statement concluded.